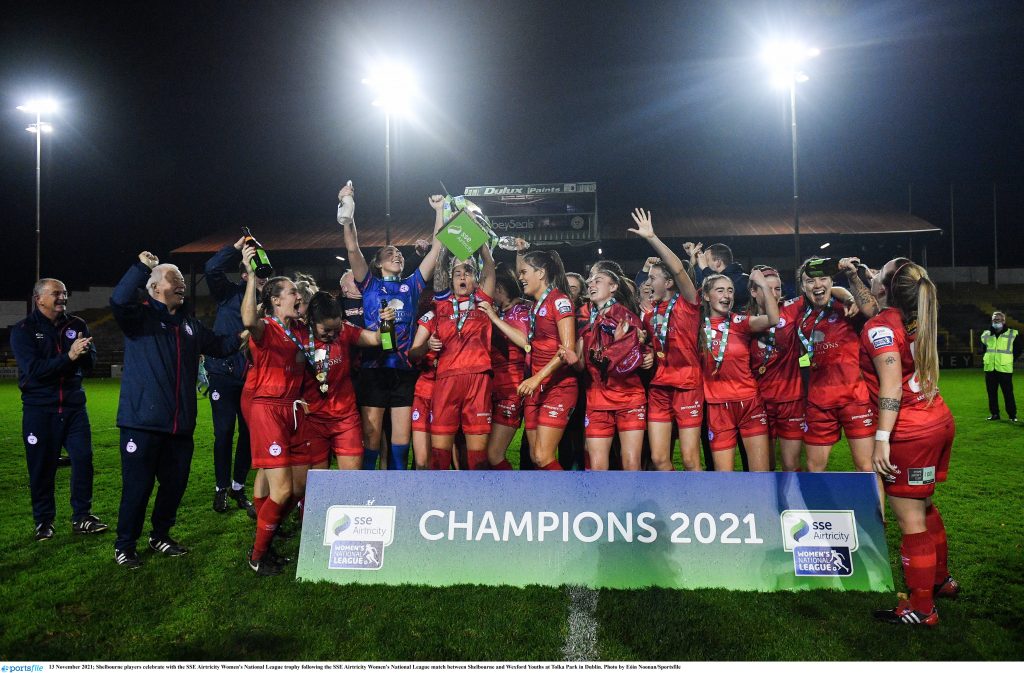 Shelbourne FC were crowned champions of the Women’s National League as they saw off Wexford Youths Women 3-2. A 5-2 win for Galway Women’s FC against Peamount United put the Reds top of the table on the final match day.

The Reds came into the game knowing anything but a win would end their title hopes, however even then, the Women’s National League title would not be guaranteed as they needed Peamount United to lose to Galway Women’s FC.

Shels started proceedings at Tolka Park with high energy and for the first fifteen minutes were matched by Wexford Youths women. Both sides moved the ball quickly and out of possession they were aggressive in winning it back.

Noelle Murray’s return to the starting XI proved positive as she picked out Saoirse Noonan with an excellent cross but the forward was unable to direct her effort on target.

Soon after, Murray threatened again as Chloe Mustaki and Jessie Stapleton linked up well on the left wing with the ball eventually falling to the No.10, although she was unable to test Edel Kennedy in the away sides goal.

The returning forward had another chance to open the scoring but her long range effort flew wide of the post.

Two minutes later, Stapleton found the net from a corner after Mustaki done well to force the set piece.

It wasn’t long before it was 2-0 to Shelbourne as Jessica Ziu raced into the box where she was fouled by Kennedy. The referee pointed to the spot and Murray made no mistake from 12-yards firing into the top corner.

The 2-0 lead did little for the Reds at this point as Peamount also lead by two in their respected fixture but when news of Galway equalising reached Drumcondra the mood around Tolka lifted.

Shels pushed on knowing they were actively doing the job they needed to do as Stapleton made it 3-0 at the start of the second half connecting with Jessica Gargan’s free-kick. Her second of the night providing a comfortable three goal advantage for the title hopefuls.

With 57 minutes played, Wexford pegged one back as Kylie Murphy raced into the box to get on the end of Ellen Molloy’s low cross.

With half an hour left to play, Galway took the lead prompting even louder cheers from the home support.

Stapleton continued to provide an outlet on the left wing as she looked for her hat-trick. First her shot in the 63rd minute looped just over the bar with the keeper beaten before later striking the bar with a thunderous strike inside the box.

Galway Women’s later scored a fourth and fifth placing the title in Shelbourne’s grasp as Noel King pushed his side to remain calm and hold on to their two goal cushion but a second goal from Wexford Youths in the 85th minute made it an uncomfortable finish for the home team as Sinead Taylor came off the bench to score from a corner.

Shelbourne remained composed and saw the game out with celebrations proceeding following the final whistle.

The quest for silverware does not stop there as the Reds travel to Tallaght Stadium next Sunday to take on the same opposition in the Evoke FAI Womens Cup final. Noel King will hope to see his side end the season with a league and cup double.