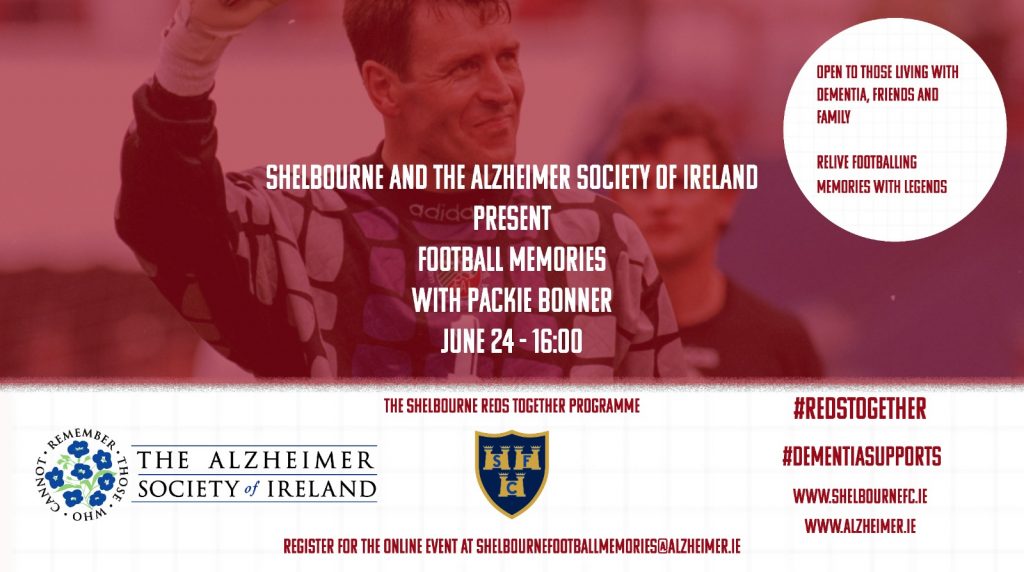 Shelbourne teams up with The Alzheimer Society of Ireland for powerful Football Memories events, Packie Bonner lined up as first guest

June 09, 2021: Shelbourne Football Club and The Alzheimer Society of Ireland (The ASI) are delighted to announce an exciting new partnership and programme of events called Football Memories. Through our Football Memories programme we aim to increase awareness of dementia, reduce the stigma surrounding it, and support communities to become more dementia inclusive.

These fantastic events will allow people living with dementia to participate in a fun and stimulating experience, using football as a unifying topic of engagement. Reminiscence will play a key part in these events with images, stories and personal experiences being shared. We aim to create a welcoming environment for those living with dementia to share their own sporting memories with us, and each other.

The following is part of the partnership:

Shelbourne FC will host each of the events and the programme will include recalling of great stories from former players and fans, engaging quizzes, and the viewing of old footage and clips from famous footballing moments.

Dementia is an umbrella term for a range of conditions that impact brain function. It can have an effect on memory, thinking, language and the ability to carry out everyday tasks.

There are many conditions which fall under the umbrella of “dementia”. Alzheimer’s is the most common of these. Vascular dementia, dementia with Lewy Bodies, and Frontotemporal dementia are other types of dementia.

There are also 11,000 new cases of dementia diagnosed in Ireland each year. That’s at least 30 people every day and anyone can get dementia – even people in their 30s/40s/50s.**

Shelbourne FC has recently been affected by dementia having lost former players Tony Dunne and Tommy Carroll recently, both of whom lived with the condition after their playing days.

The issue has become more and more prevalent in the game, and both SFC and The ASI have identified the positive power of football to help raise awareness for the conditions while also creating fun, engaging and impactful experiences for those living with dementia.

Though we wish to enjoy these special events in future at Tolka Park, we will be beginning the series virtually and we would be delighted to begin registration for the events via shelbournefootballmemories@alzheimer.ie now.

These events are specifically designed for persons living with dementia to attend and enjoy. Registration is open to all, however we especially encourage those on the dementia journey, along with their family carers, to register for the event and to participate in what is sure to be a series of wonderful evenings at Shelbourne FC with our friends at The ASI.

Shelbourne Football Club CEO David O’Connor said: “We’re really excited to begin this new programme of events in close partnership with the Alzheimer Society of Ireland. The Society is known throughout Ireland for their invaluable work that has impacted countless lives and we hope these events can add to that using the power of football as a unifying force. At Shelbourne FC, we want to create an environment where everyone is welcome and these events go further to creating that. Our work so far with the ASI has shown to us how impactful these events will be and we hope supporters can experience that along with us.”

The Alzheimer Society of Ireland, Donal Murphy, Operations Manager said: “It is wonderful that we are now in a position to introduce the concept of Sporting Memories into Ireland. These international programmes aim to provide reminiscence therapy for People living with Dementia and are enjoyable events for all. This is an initiative we were exploring and so we were delighted when Shelbourne contacted us with the concept of a ‘Football Memories’ programme. The programme will involve former players speaking about their careers, sharing memorabilia and showing clips of memorable matches they would have played in over the years. These programmes have been in place in Scotland for over a decade with Scotish Football clubs working in conjunction with Alzheimer Scotland. We are very excited to partner with Shelbourne FC on their ‘Reds Together’ goals and it is our pleasure to support them in their work to make a positive impact to the lives of People living with Dementia and their caregivers”

**Figure referenced from Pierce, T., O’Shea, E. and Carney P. (2018) Estimates of the prevalence, incidence and severity of dementia in Ireland.

About The Alzheimer Society of Ireland (ASI):