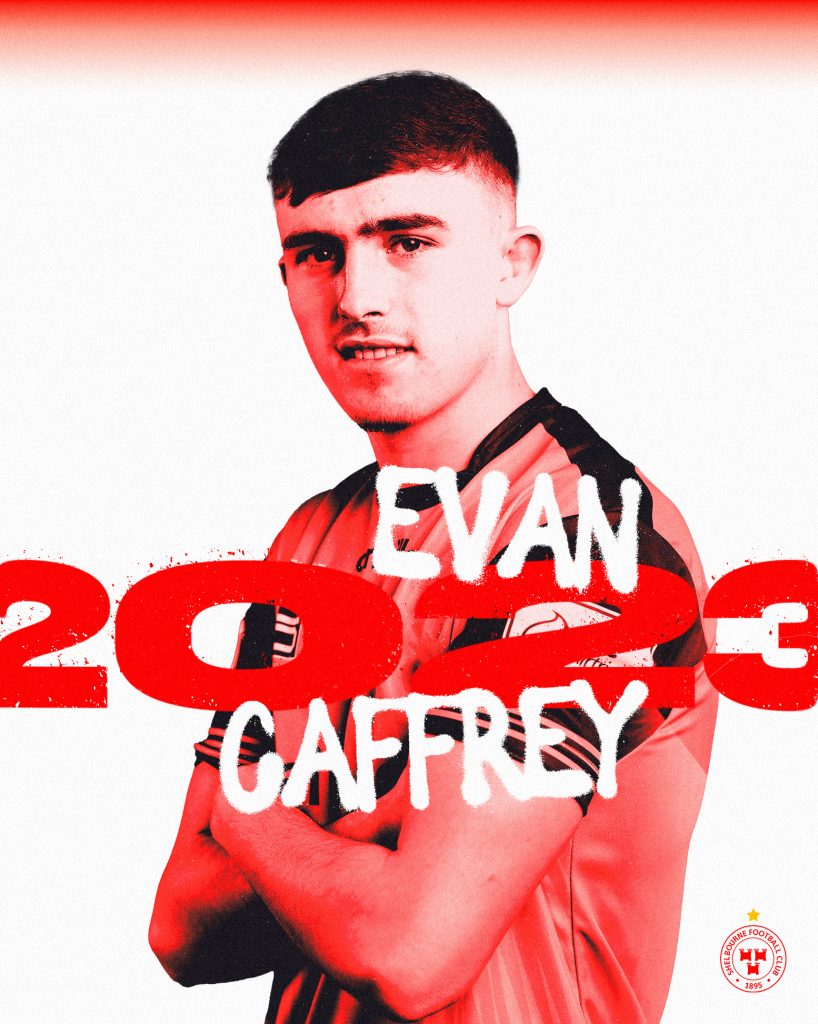 Shelbourne Football Club is today delighted to announce the signing of Evan Caffrey from UCD.

The midfielder has put pen to paper on a deal that will keep him at Tolka Park until November 2023.

Caffrey is a grandson of Reds legend Theo Dunne, the only man to lead an Irish club out at the Nou Camp after the Reds visit there for the European Cup clash in 1963.

The 19-year-old came through the underage system at Shamrock Rovers, playing with their U15s in 2018, where he played under Damien Duff and their U17s in 2019.

In 2021, Caffrey joined UCD and scored on his debut for them in a 2-1 win against Wexford at the Belfield Bowl in July. The midfielder went on to make 9 appearances that season for the Students.

The Dubliner was an ever present under Andy Myler for 2022 as the Students did enough to secure Premier Division status in the SSE Airtricity league for 2023 by beating Waterford FC in the promotion/relegation play-off 1-0 at Richmond Park.

Caffrey made 36 appearances for UCD including 31 starts, scoring two goals, including a memorable long range effort against Finn Harps that proved vital at season’s end, as UCD finished above Ollie Horgan’s side.

A versatile midfielder who is technically proficient on the ball, the addition of Caffrey to the squad bolsters the Reds options in the middle of the park.

Damien Duff, Head Coach, Shelbourne FC said: “Evan was my captain in the LOI U15’s five years ago so we know each other very well. I have followed his career closely and it was so pleasing to see him do so well over the last few seasons.

“He has a great understanding of the game, has top class technical ability and knows the demands we put on players. He can also play numerous positions which is great. I can’t wait to work with him again and watch his career continue to grow with Shelbourne FC.”

Evan Caffrey said: “I am very excited to be joining Shels, as it’s such a special club with a great history and brilliant fans. It’s also a proud moment for me and my family as I’ll be joining up with my cousin Gavin Molloy, but also my grandad Theo captained the club in the 1960s.

When I got the call from the manager, it was a no-brainer as I played under him before, and I knew what he was like. I think it’s the best place to be to improve as a young player, and I can’t wait to get started.”