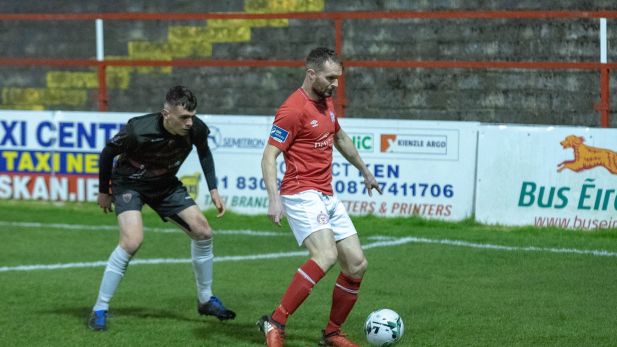 Having spent 2011 and 2012 with Shelbourne amassing an impressive 15 goals, promotion and an FAI Cup Final experience, Conan Byrne has returned to the Reds inspired by his “gr&aacute;” for the club. “The first time I walked into Tolka Park as a player, I got hairs standing on the back of my neck. When I was a kid, if I was to go to the football on a Friday night, it would have been Tolka Park,” the winger says.

After his first stint with the club, which had been extremely successful, Byrne has gone on to play for St Patrick&rsquo;s Athletic in a well-recognised career glittered with wonderful goals and honours. This time around, Byrne remains committed as ever to bring success back to Drumcondra, while being encouraged by new manager Ian Morris, describing him as “a breath of fresh air.”

“Ian has been fantastic. He gets his point across extremely easy and the sessions are very good, really concise. They&rsquo;ve been very different, never the same thing and that&rsquo;s what you want as a player. Every day you will be learning something new, and you take in everything Ian and the staff have to say,” he tells shelbournefc.ie.

Byrne is under no illusions on the challenge of trying to bring back Premier Division football to Tolka Park. “Everyone has a point to prove in the league. I’ve said it since the start, it&rsquo;s a very competitive league this season. People were saying we would run away with it, but that was never going to be the case. Every single game is going to be difficult.”

Heading into Saturday night&rsquo;s game away to Longford Town, Shels sit on top of the table on goal difference, but go into the game having lost 2-1 away to Cobh Ramblers. Byrne has been pleasantly surprised at the positive reaction midweek to that loss in training. “It&rsquo;s been very positive, actually, considering the result. We will have to take the good with the bad throughout the season. It was just a case of getting back to work, and we know what we have to do. Longford isn&rsquo;t going to be easy,” he said.

With a large away travelling crowd expected again at the City Calling Stadium, the Dubliner cites the club&rsquo;s supporters as another reason behind moving back. He remembers “the noise of the crowd” upon gaining promotion against Finn Harps in 2011 at Tolka Park. “It&rsquo;s a cliche but the fans are the twelfth man, it’s so true. When they&rsquo;re pushing you on you gain the extra 5 or 10 percent or go on that lung bursting run. That roar gave us the extra against Finn harps. Those are the days you want to recreate.” Although “a good few clubs” had come in for Byrne during the off-season, he says “as soon as Ian picked up the phone, that&rsquo;s the team I wanted to come back to.”

Byrne has also been excited by the squad that has been brought together for the 2019 season, especially the balance of youth and experience, an element he says is the main difference between this and 2011&rsquo;s squad. The professionalism in the camp is also something which has struck him, while also being impressed by the young players eagerness to learn. “The set-up has really come on, and the players are really eager to learn, always asking questions. I want to lead by example, and always be positive. We do not want negativity.

Mixing work as a teacher, family life and media work, Byrne is in no doubt as to the desire he has for getting Shels back to the Premier Division. “That&rsquo;s what drives you on. You were here last time, and you were successful. Promotion, FAI Cup Final and that time we consolidated ourselves in the Premier Division. Seeing Shelbourne in the First Division didn&rsquo;t sit easy with me and we want to get those past glories back.”