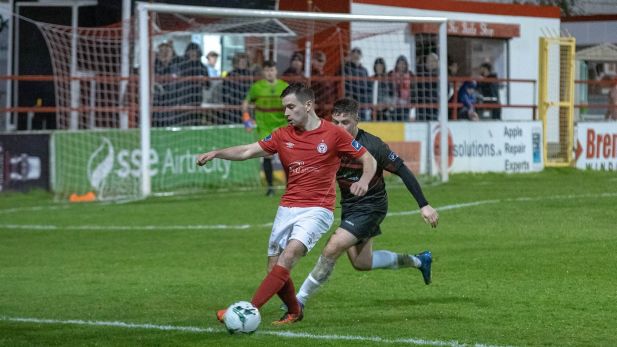 With the Reds travelling to Longford Town on Saturday night, Shels boss Ian Morris says the “whole squad is ready to go” ahead of a “massive week.”

Despite a defeat last time out against Cobh Ramblers, Shelbourne remain top of the SSE Airtricity League First Division and play Longford Town on Saturday night at the City Calling Stadium looking to get a positive result.

Morris has been delighted with the away travelling support on top of strong home crowds, and this is something he believes the players will thrive off.

“We understand the frustration last week but it&rsquo;s a huge credit to them to see the numbers that have travelled. There&rsquo;s big numbers due this week again and we want to give them a performance. We really want to get the fans behind the team. We&rsquo;re in this together,” he said.

Despite a strong start to the season with three wins so far, Morris told shelbournefc.ie that last weekend&rsquo;s 2-1 loss to Cobh Ramblers was a “massive disappointment.”

“Nothing went right for us and we&rsquo;re going to have to be brave enough to receive the ball and play,” he said.

“Some days you get one or two players who have an off day but as a collective, myself included, it didn&rsquo;t go well. It was frustrating but we need to get over it and bounce back, we&rsquo;re still top of the league so we&rsquo;ve the chance to bounce back.” he added.

The Shels Head Coach has been encouraged, however, by the strength he has witnessed in the players this season, and impressed by the attacking players in the side.

“We have to focus on our strengths. It’s about giving players the confidence to express themselves. We&rsquo;ve got really good players throughout the squad. They wouldn’t be here if they weren&rsquo;t so good.

“These things happen in the course of a season. We&rsquo;ve got good players so we&rsquo;ll put it to bed. We&rsquo;ll move the ball quickly. It&rsquo;s a big pitch with a quality surface which will suit us,” he added.

Longford Town come into Saturday&rsquo;s game on the back of a 1-0 away win at Athlone Town and Morris believes they&rsquo;ve got a good squad with a “wealth of experience”

“Longford have gone under the radar. Everyone in the media were focused on ourselves but they&rsquo;ve got Premier Division players with good squad depth. It&rsquo;ll be a tough test, but we need to be confident and positive going into it,” he said.

Alex O’Hanlon returns to the squad after injury with Greg Moorhouse suspended following a red card against Cobh Ramblers on Friday.

Shane Farrell remains injured, however the young forward&rsquo;s recovery has proceeded well in rehab which has given him an opportunity to build up his physical attributes.