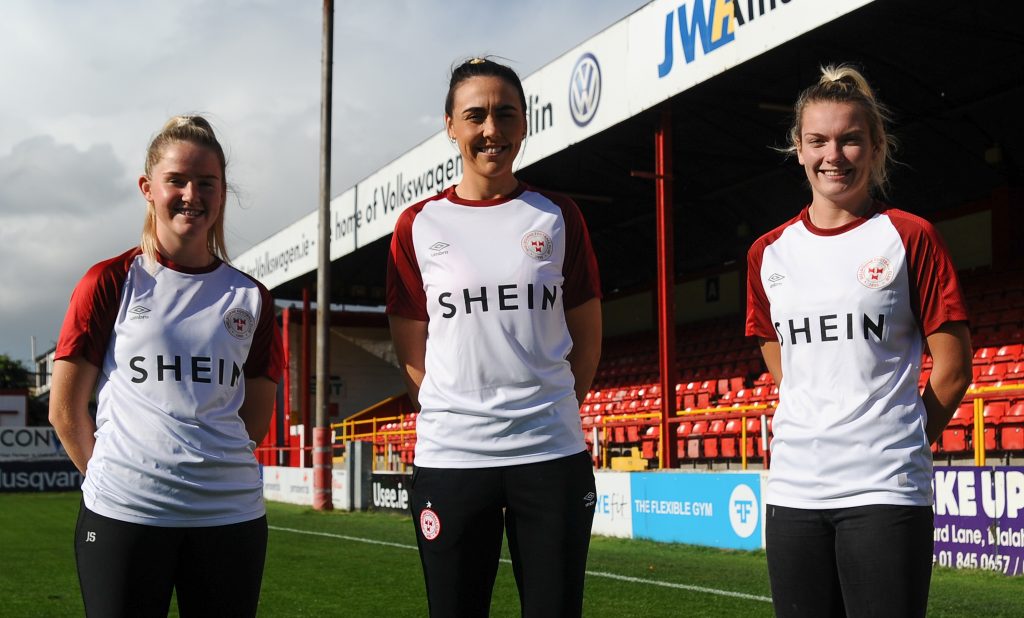 The partnership marks another significant milestone for our WNL team as we seek to grow the Club on the pitch and commercially.

As part of the sponsorship, Shelbourne FC WNL matchday tops and t-shirts will be branded with the SHEIN logo, which will be displayed prominently on the front.

Shelbourne FC players will also feature in social media collaborations with the global brand allowing for further exposure for both the Club and SHEIN.

The announcement comes as Shelbourne FC play the first ever FAI Women’s National League match to be broadcast live on Irish national television on TG4 at 5pm on October 2nd.

It is the Club’s belief that there is significant room for growth of the women’s game and partnerships with large global brands like SHEIN can help the game get to where it needs to be.

Shelbourne FC faces an exciting Women’s National League run-in as well as an FAI Women’s Cup campaign with semi-final on the horizon and we very much welcome the opportunity to share this journey with SHEIN and other key club partners.

Shelbourne FC CEO, David O’Connor said: “We are thrilled to welcome such a well-known brand as Official Womenswear partner to Shelbourne FC. It is fantastic recognition of the potential for growth at our Club for our WNL team and of the work done at our WNL set over the past number of years to allow us to grow commercially. We have an exciting end of season in store for our WNL team and we look forward to sharing this excitement with our new partners at SHEIN. With more and more coverage of the game here, there are exciting opportunities like this for our commercial partners where we look to be able to grow together.”

Founded in 1895, Shelbourne Football Club is a leading professional football club based in North Dublin. Shels, as commonly referred to, has won 13 League of Ireland titles along with 10 national cups, one Women’s National League and one FAI Women’s Cup. The Tolka Park side compete in both the SSE Airtricity League and FAI Women’s National League and has a thriving Academy based at the Athletic Union League in North Dublin with over 400 boys and girls.

Founded in 2008, SHEIN is a fast-fashion e-retailer with a global network that spans 220 countries and regions. Here at SHEIN, we place a premium not on our apparel, but on choice. That’s why we drop 1000 new fashion items daily, spoiling our customers with a dizzying selection of on-trend womenswear that they can mix and match to their heart’s delight. With our tagline” Wear Your Wonderful”,  we believe that the clothes we wear reflect our personalities and we want to empower today’s women to explore and express their individuality. With the abundance of choice we provide, our customers can intricately craft that perfect look which reflects their individuality. Simply put, we help you do you. To learn more about SHEIN, follow us here and below social channels: