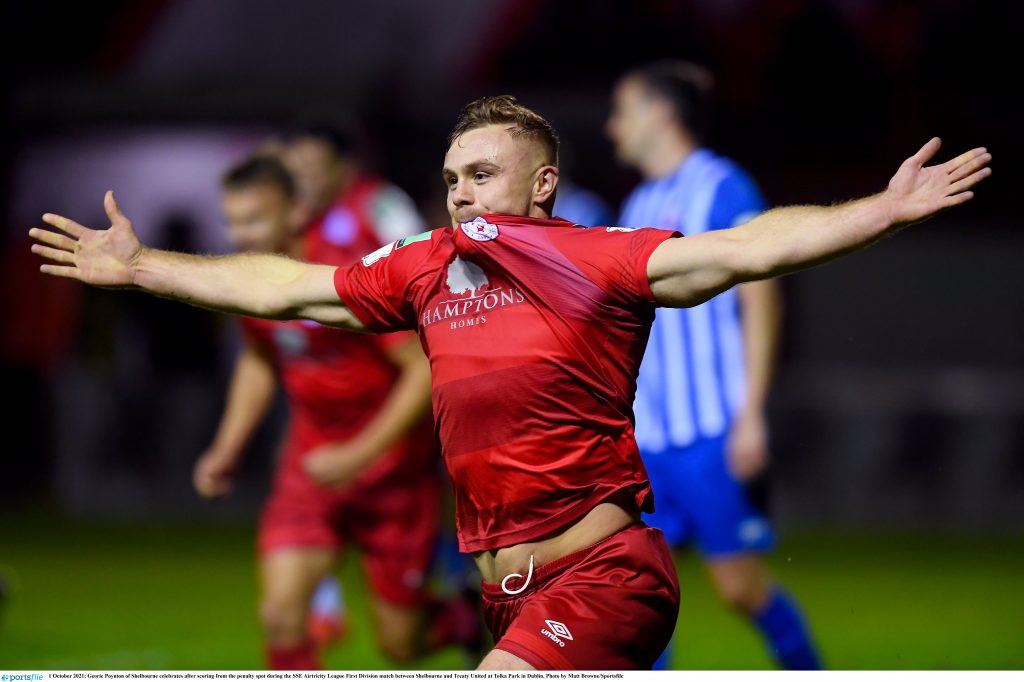 Shelbourne FC secured the First Division title with a 1-0 win over Treaty United with Georgie Poynton’s second half penalty being the only goal of the game.

Ian Morris named an unchanged side from last week’s fixture against Cabinteely while Tommy Barrett made three changes to his Treaty United side. Marc Ludden, Sean McSweeney and Conor Melody came in to replace Joe Collins, Kieran Hanlon and Jack Lynch for the away team.

The opening minutes of the game were slow with neither team creating a chance but as the game grew, so did the home side’s performance.  The first big chance of the game would come for Yassine En-Neyah with 15 minutes on the clock.

Following a corner from Georgie Poynton, the ball was headed back into the box by Micheal O’Connor. The ball landed in the centre of the Limerick sides six yard area where after a scramble from the defence, fell to the No.5. The 21- year-old’s shot was easily saved by Tadgh Ryan but it marked an increase in tempo from the league leaders.

O’Connor would have the next big chance of the match in the 30th but the striker was unable to get a good connection on his shot making it an easy stop for the Treaty No.1. Just 30 seconds later Poynton would have a chance of his own with his long range strike going just wide of the goal.

The Red’s had finally started to come alive with a succession of chances from this point on. Ryan Brennan linked up well with O’Connor but failed to get enough power on his shot while moments later Kevin O’Connor forced a good save to win a corner.

With 38 minutes played Shelbourne continued to pile pressure on Barrett’s side with their No. 26 connecting with a corner but his attempt would ultimately strike the post. Shortly after, the home side thought they had opened the scoring with the ball finding the back of the net directly from a corner. However, referee Alan Patchell would rule it out for a foul on the ‘keeper marking the final chance of the half.

Treaty United would roll the dice first with Kieran Hanlon coming on to replace Sean McSweeney at half-time in an attempt to create more chances.

The substitution did little to impact the game as Shels started the second half how they ended the first with O’Connor having two half chances in the opening five minutes.

The first booking of the game would go to United’s No.23 Callum McNamara for a foul on En-Neyah but nothing would result from the free kick.

Treaty would eventually test Brendan Clarke when Matt Keane forced the No.1 into producing an excellent save from inside the box.

It was now Ian Morris’s turn to make a change with Brian McManus coming on to replace Kameron Ledwidge with 65 minutes played.

Following Keane’s big chance, the away side finally got a hold of the game with the team from Drumcondra struggling to create anymore chances for the next ten minutes.

The breakthrough would finally fall to Shelbourne when Poynton kept his cool from 12 yards out to score a penalty for his side in the 74th minute.

Treaty would use up two more substitutions in the 79th bringing on William Armshaw and Joel Courstrain for Conor Melody and Matt Keane as they now chased an equaliser. Dayle Rooney would be next to enter the fray replacing En-Neyah with seven minutes left of play for the Red’s with Clyde O’Connell also coming off for Dean George for the away team.

Ryan Brennan had a chance to wrap up the three points but his effort outside the box would go just over the bar in the 88th minute.

The Limerick side continued to threaten for an equaliser but would be unable to create anything of substance with Shelbourne holding on for the three points clinching promotion as well as the title.