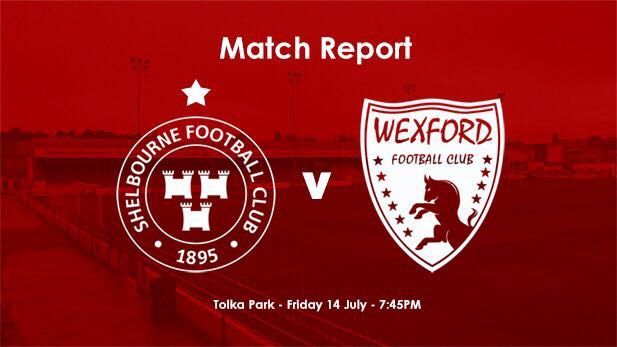 Bottom of the table Wexford upset the form table with a 2-1 snatch and grab victory at Tolka Park.

Report with thanks to sseairtricityleague.ie (with edit to correct name of Wexford first scorer)

Shels came flying out of the traps and grabbed a dream start after just two minutes, when hitman English reacted quickest to a terrible mix up at the back between Corey Chambers and AJ Lehane to tap home.

Shelbourne dominated the half, having effort after effort on Corey Chambers goal racking up an incredible 10 efforts, not including the goal. Owen Heary cut a frustrated figure on the sideline at his side’s inability to make their dominance count.

On the stoke of half-time, on-loan Shamrock Rovers striker Aaron Dobbs whipped in a dangerous cross just under Dean Delaney’s crossbar. The Shels keeper did well to push it away from goal, but the ball fell to the feet of Eoin Porter who had his scrambled effort cleared off the line thinking he scored. But it remained 1-0.

Wexford grew into the game, looking a lot more solid and grabbed an equaliser just after the hour mark. Shels failure to clear on the edge of their box following good pressure by Dobbs who, after winning the ball back, laid it off to Croke who drilled low and hard into the far post.

In an amazing turn around, Wexford snatched the lead just five minutes later, again from poor defending. Another goal mouth scramble that wasn’t cleared saw Mark Slater and Dobbs have efforts blocked before midfielder Mikey Byrne hammered home from inside the area to make it 2-1.

Shels huffed and puffed but were unable to get the illustrious equaliser their play deserved as their five game unbeaten streak came to an end.