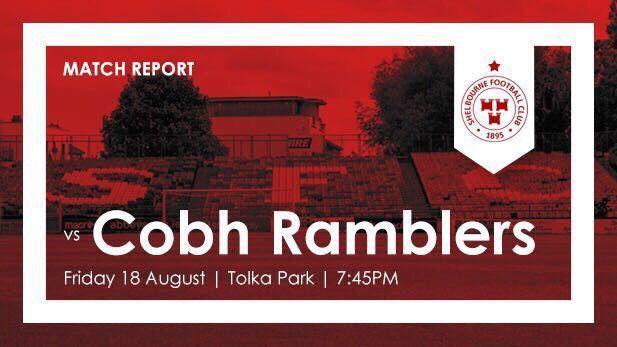 Full Time Whistle report with thanks to sseairtricityleague.ie

10-man Cobh grabbed all three points as the push for promotion continued with an against the run of play victory against a Shels side who will be wondering how they didn’t get at least a point from tonight’s game.

You would be forgiven, at how the game started, for thinking the home side were the promotion chasers with Shelbourne utterly dominant in all aspects of the game. David O’Leary ran the midfield as the visitors struggled to get any sort of rhythm to their game with the ball not sticking up top . Halfway through the first period Shels were inches away from taking the lead, when Dylan Kavanagh delivered a delicious cross from the left wing and talisman James English was inches away on the stretch.

The second half continued in the same vein with both English and O’Brien being denied from last ditch tackles right from the off. The visitors task to get a foothold in the game was made ever more difficult when Peter Callanan received a straight for a terrible lunge over the ball on Prendergast.

Amazingly the 10 men took the lead when a hopeful ball over the top wasn’t dealt wth by Byrne, who failed to cut out the lofted pass and Cian Leonard, who worked tirelessly throughout, kept his composure to slot home. Incredible scenes were to follow shortly after, when Derek Prendergast was shown a straight red card for a late challenge on goalscorer Leonard. Amazingly referee John McLoughlin consulted his linesman and changed his decision to offside letting the hosts off the hook.

Shels, despite their possession failed to break down the resolute Ramblers defence and the three points headed back down to Cork