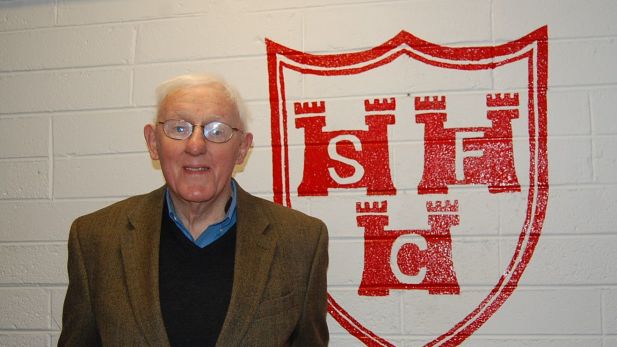 Hugh, a goalkeeper, had been a senior GAA player with St. Vincents but fell foul of ‘the Ban’ and so continued to play with the Reds from 1949 to 1952 playing in 41 League of Ireland and 8 FAI Cup games.

The most important of the FAI Cup games were the drawn game and replay of the 1951 final against Cork Athletic. Chris Sands in his book ‘SHELS – a grand old team to know’ describes the first game (played in Dalymount in front of 38,192 spectators), which he watched from in front of the main stand ” It was a good position, good enough to see Paddy O’Leary score for Cork just past mid-way through the first half, so Cork led by 1-0 at half time. Than in the second half, try as they might, it seemed that Shels were heading for another FAI Cup Final defeat, until about ten minutes to go, Tommy Carberry scored to complete his record of scoring in every round, and to save our team from defeat as the game ended in a 1-1 draw.”

In the replay (in front of 22,010 spectators), Cork’s Johnny Vaughan scored just on half-time and “try as they did, Shels did not manage a reply, so the FAI Cup went to Cork Athletic, and Shels had lost again in an FAI Cup Final.”

Hugh Brien emigrated to the USA shortly after and following a very successful career as a senior officer in the US emigration service, reached second-in-command in an organisation of over fifty thousand officers, is now retired and living in Virginia, USA.

He is in Ireland to attend the Annual Dinner of the O&rsquo;Connell Schools&rsquo; Past Pupils Union &ndash; he did his Leaving Cert there in 1949 &ndash; and will be presented with their ‘Past Pupil of the Year Award’.