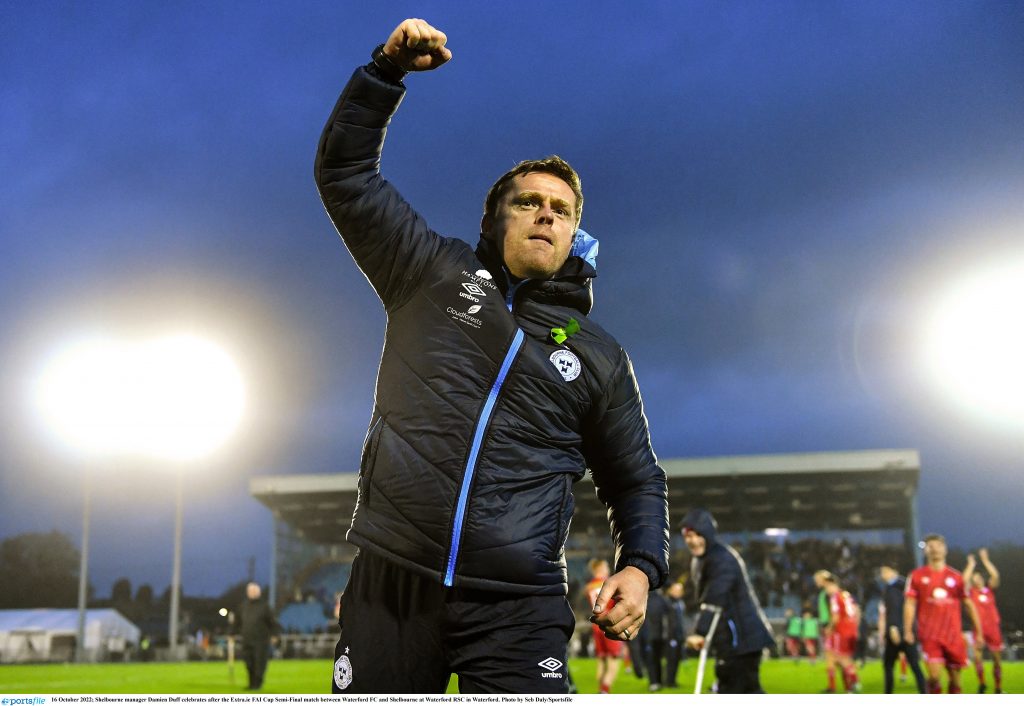 The Reds come into the game boosted by a 1-0 win over Waterford in their last outing, which set up a meeting with the Candy Stripes in the decider at Lansdowne Road on November 13th.

Jack Moylan made his first appearance since the 3-0 win over Bohemian FC in the FAI Cup quarter-final. Moylan is back in action after a spell on the sidelines with an ankle injury.

Shane Farrell also shook off a groin issue to play a pivotal role as the Reds ended an 11 year wait to return to the blue riband occasion.

Ahead of the trip to Derry Duff told ShelbourneFC.ie: “Sean Boyd is out, Matty Smith can’t play against Derry City. Aside from that we’re near on full strength and good to go. Was great to have Jack Moylan back, he did unbelievably well getting back last week in time for the game.

“It was a risk putting him on, you’re not sure what way the body will hold up, what he’s going to be like, but we can count on Jack. He did really well when he came on. He just needs to get back to where he left off in the Bohs game, because that’s the level he can hit.

“Brian McManus is available, he’s a live option now. We had him on the bench against Rovers, but we didn’t want to risk him, especially with the nature of a hamstring injury. We’re really pleased with how Brian has come on. He’s missed a lot of games this season with injury, so we’re hoping he gets a run now, because we know the ability he has.”

Derry are second in the SSE Airtricity League Premier Division table, six points behind the leaders Shamrock Rovers but with a game in hand. Duff is expecting a tough test away from home:

“Look you can say the pressure is on them for many reasons, there’s a league title there for them if they can get the results, the race is still open, but I’m not worried about the pressure being off us, it’s not off us at all.

“People outside can say there’s no pressure on us, but it’s absolutely not the case for us, the one thing we’ve created here is a pressure environment, we’re setting our own standards, we’re not driven by outside or around us, the lads have bought into that, they aren’t allowed to take the pressure off, they need to be at it every game.

“If people expect us to roll up there, rest players, celebrate that we’re safe, that’s not us. We’re after two things, and it’s every week. Regardless of anything else going on, that has never changed. We’re looking for A) Performance  B) Results.”

The Reds have lost just once in their last six outings in all competitions, and secured hard fought draws with Shamrock Rovers, St Pats and Derry. Assessing the form of his side at present, Duff told ShelbourneFC.ie: “Our form in the league, we’re looking at it, the results are patchy, but performances, I can’t fault. Lads know though and have been told firmly that the league results need to improve and where we want to get to for the remainder of this season, it needs to start now.

“We’re safe but we still need to address this and find the consistency and match some of those good performances with the results they’ve deserved, but haven’t gotten. The lads know it, the league is our bread and butter and they’ll work hard for the remaining games to improve those results.”

This will be the fourth meeting between the sides this season. Twice the Reds were undone by late goals in this fixture, a ​​Ryan Graydon goal in stoppage time in Tolka back in August saw Derry pick up all three points, while back in March Patrick McEleney scored in the 74th minute to give the Candy Stripes the points.

On their last visit north, the Reds beat Derry City 2-1, and were the first team to win against the title contenders on their home patch this season. Reflecting on the previous meetings this year with Derry, Duff said: “Could argue a lot of positives to be taken from every game we’ve had against them, all been tight games.

“The one in the Brandywell, it was a great win, and beyond that it was very important because it gave the players belief for the season, belief in themselves, what they were doing, and where they could go. In Tolka, we had two flat performances which was disappointing. If you give a good team an inch, they take it.

“That’s what Derry did in our place, they’ve all been tight games, and I expect tomorrow to be no different, then all roads lead to Lansdowne Road on November 13. We’re not going up there to be resting players, or trying to be clever, before the final, we want to go up and win the game.”

Shels are 7th in the table at present, six points behind the team currently occupying the place above them. Duff says securing a high a finish as possible is a goal for his team:

“Climbing up the table has been a big motivator for months on end, it’s something we’ve spoken about, each time it comes to the crossroads, when we have had an opportunity to jump up a place, there’s been times we haven’t been able to get the result that would help us kick on.

“Look, we know budget wise, there’s a big difference in some of those teams above us, what they’re operating off, it’s a big ask to make that jump but that’s what we want to do, we want to do and it’s going to give us a drive for the rest of the season.”

Shels will be without Sean Boyd who serves a two game suspension after accumulating 12 yellow cards this season. Jad Hakiki continues to rehab an injury, while Dan Hawkins and Conor Kane remain sidelined with long term injuries.