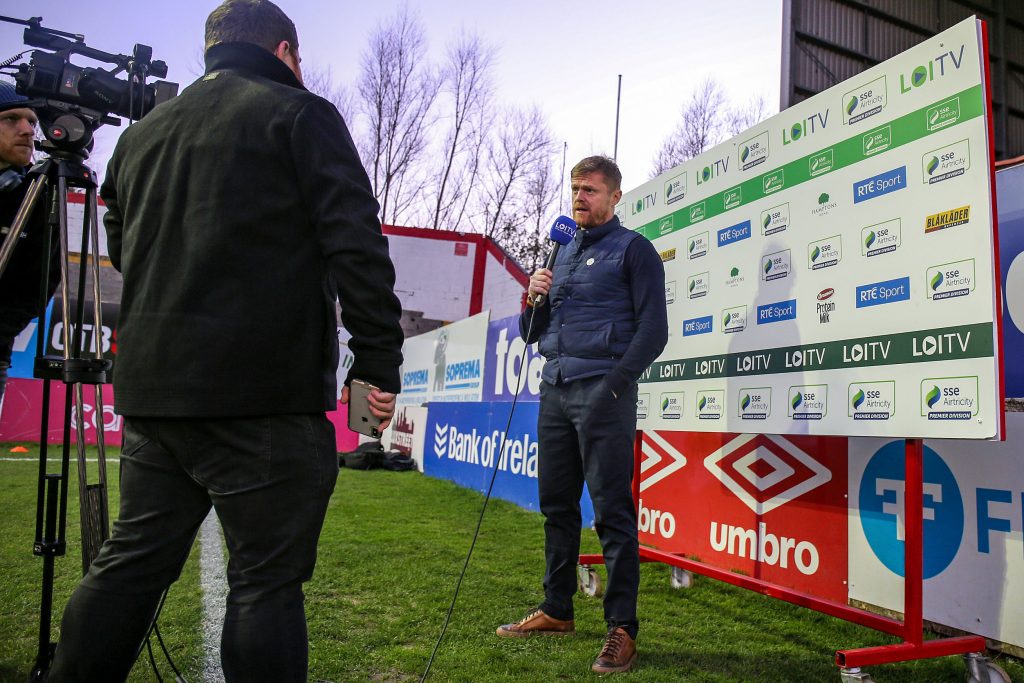 Shelbourne make the trip to Casey’s Field on Friday to face Dundalk in the SSE Airtricity League.

The Reds were boosted by a return to action of club captain Luke Byrne in the 1-0 loss to Derry City on Monday night, while Jad Hakiki also came off the bench once again, as the teenager gained more valuable minutes as he edges closer to full fitness.

Head coach Damien Duff was delighted to see both return to the field. Duff told Shelbournefc.ie: “We got Jad on, he’s still feeling pain. We’re monitoring that one. He’s not quite right. We can’t rush him, we have to give him the time to fix the problem. Good to get him minutes, but he’s not ready yet.

“Lukey is also managing his load, the knee has caused him some issues but he’s got himself right now and he’s giving us everything.

“The whole squad is the same, we’re light on numbers, I let lads go, that was my decision and I stand over it. It was the best thing for us. Could say we’re light but what we’re left with is an amazing group, I won’t be too critical of Monday’s performance, yes energy levels were low. They still put their bodies on the line and gave everything, we were unlucky, we were a few minutes away from picking up a point.”

Reflecting on the 1-0 loss to Derry last Monday night, Duff says his players won’t find it difficult to refocus ahead of the next game: “We were a bit flat, can probably understand it, a tight turnaround from Bonagee away, we’re managing player’s loads, we’ve a young squad but they’ve prepared well, they’re ready for another quick turnaround and lads need to be back on it, it’s live on tv, it’s a big game for us, we have our own aims and ambitions for what we want to do over the coming weeks, confident we’ll see our guys motivated and ready for it.”

The Reds face a Dundalk side who lost 2-0 to Sligo Rovers on Monday night, that result came after a hard fought win over Wexford after extra time in the FAI Cup.

Having been desperately unlucky not to leave Louth with a result on their last visit there, Duff knows his players will be eager to make up for that disappointment. The Reds boss told Shelbournefc.ie: “They’re a good team, right up the top end of the division, we know them well, they’re well organised with a lot of quality, probably like ourselves they are contending with a few injuries, judging by some of their team sheets recently, they might be managing players as well.

“In the games we’ve had so far this season, they’ve been tight, our last visit to Oriel Park we put in a decent performance, we were unlucky not to leave with anything.

“In every game you want the two teams to be the only factor in the outcome and with some of the decisions that day, it wasn’t the case which is frustrating. Consistency is what we want, from our players, staff, and we’d expect the same thing from the referee and officials too. The last time we were in Dundalk, that wasn’t the case. We were down to 10 men, should’ve won the game, I was sent off, poor decisions all night.” Duff added.

The Reds face a massive few weeks, with the trip to Dundalk followed by the visit of Sligo Rovers to Tolka Park and then an FAI Cup quarter-final with Bohs at home. Duff says everyone on the team is relishing the business end of the season: “We’re highly motivated, and we know after Monday how important it is to find a bit of form, especially going into that Sligo game and then the FAI Cup match with Bohs.”

Matty Smith is available again having missed the last game against Derry, Duff reckons the Scottish attacker could have a big part to play over the coming weeks: “Matty has done really well, he’s very hard working and he’s made a positive impact in the games he’s played. I said when he got here ‘I’m not putting you under pressure to score goals and assists’, I just want him to play his game, and show what he can do. He was outstanding against Bohs, unlucky not to score, he’s got two assists in the FAI Cup. He’s a proper striker.”

Reflecting on the Reds FAI Cup quarter-final draw, Duff said it is an occasion to be savoured: “It’s a brilliant draw, a few teams probably eyeing up certain teams, we weren’t. Number one, we wanted a home draw, and number two, a proper game. That’s what we got. A Dublin Derby, at Tolka, a lot on the line. The players are excited, it’s the perfect draw. We’re buzzing for it.”