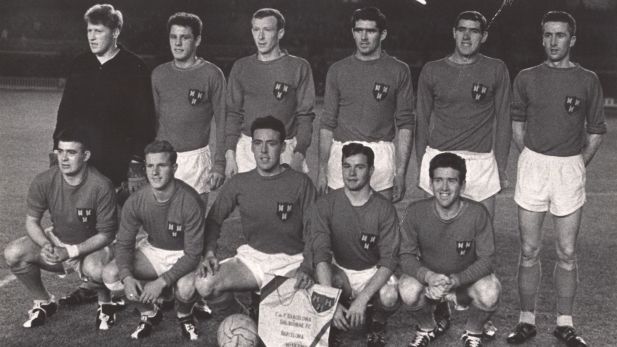 To mark 55 years since our Cup Winners’ Cup tie with Barcelona in 1963, the Spanish Football Podcast will be interviewing #Shels legends Joey Wilson, Freddie Strahan and Jackie Hennessy in the Sugar Club on Tuesday, January 16th.

Tickets for the event can be bought here: https://www.eventbrite.ie/e/the-spanish-football-podcast-li&hellip;.

#Shels fans can get a 20% discount by entering the promo code shels63.

Join us at The Sugar Club in Dublin for the world first live show of The Spanish Football Podcast with Sid Lowe, Phil Kitromilides and Alex Kirkland jetting in from Madrid for the night. There’ll be a 21st Century La Liga Legends finale, some Patrick O’Connell chit-chat, maybe some Ian Harte and who knows, is there anything left to be said on ‘those two’ ?

55 years ago Shelbourne Football Club became the first Irish team to play at the Camp Nou against FC Barcelona in the European Cup-Winners Cup. Delighted that joining us this evening will be three members of that team, Joe Wilson, Freddie Strahan and Jackie Hennessy to talk about their experiences. We’ve received many rare photographs from the match and we’d like to say a big thank you to Fergus Dowd of the Patrick O’Connell memorial fund group for putting this together.

We’ll have the world premiere of the trailer for the upcoming Don Patricio movie being screened on the night. Director Michael Andersen will be with us from Seville and join the Shelbourne lads on stage all to to be interviewed by Maureen O’Sullivan TD.

So, join us for an evening to celebrate all that’s great about Spanish Football and the stuff that’s too hot for the pod.