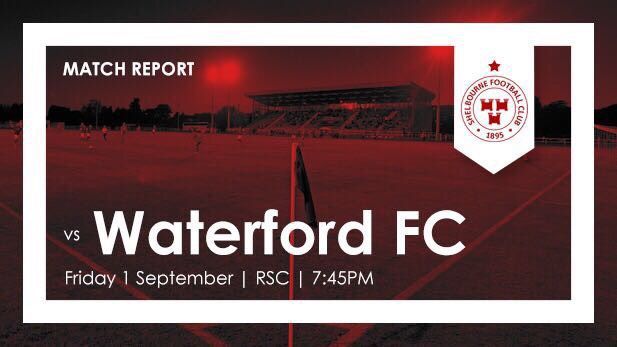 Shelbourne delay Waterford in their quest for promotion, by taking a point from their RSC meeting.

Report courtesy of sseairtricityleague.ie below

Despite levelling early in the second half, The Blues couldn&rsquo;t find a winner despite their second-half dominance. Waterford had a golden opportunity to open the scoring after just three minutes.

Mark O&rsquo;Sullivan was fouled in the penalty area but David McDaid fired high over Dean Delany&rsquo;s crossbar. And they were left to rue that miss as Shelbourne took a 5th minute lead. A long ball from the back caught Waterford&rsquo;s Sean Heaney out and Adam Evans collected.

He cut inside the defender before beating Matthew Connor to make it 1-0. Mark O&rsquo;Sullivan and John Martin had chances for the home side, before Evans almost doubled the lead &ndash; he forced Matthew Connor into a smart save.

As half time approached, it was Evans again causing problems, this time he set up Mark Hughes but his header couldn&rsquo;t beat Connor. The Blues levelled just three minutes into the second half.

Paul Keegan whipped in the corner from the left into a packed penalty area for Aaron Drinan to get the final touch to make it 1-1. John Martin and Dylan Kavanagh traded chances for either side before Paul Keegan&rsquo;s free kick from outside the box didn&rsquo;t trouble Delany.

The Blues looked for a winner and substitute Sander Puri almost made an instant impact &ndash; he picked up the ball from Drinan but his effort crashed back off the post. Puri fired over before he had another late chance from Drinan&rsquo;s right-wing cross but he couldn&rsquo;t connect.