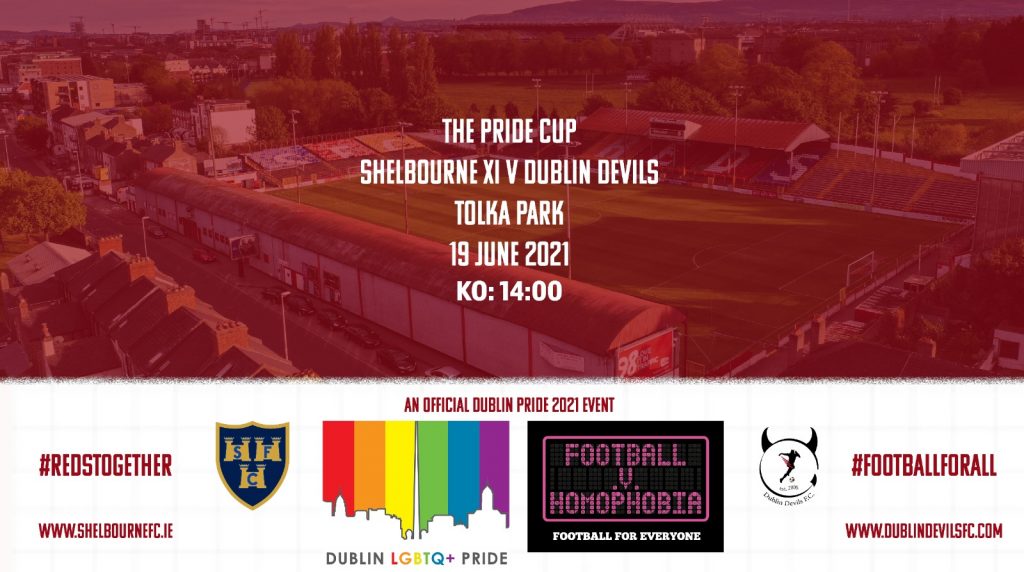 The 2020 edition of the game was postponed due to the Covid-19 pandemic but we’re delighted to be able to celebrate diversity in football once more this year.

A Shelbourne team made up of well-known club figures including Tony Sheridan, Stuey Byrne, Alan Cawley, Ian Morris, Seana Cooke and Shelbourne staff and much more will face the Devils in a game to bring inclusiveness in the game to the fore.

As a game also marking the Football v Homophobia campaign, we will celebrate LGBTQ+ participation in sport and diversity in our community.

The first game against the Dublin Devils was held in 2017 and has grown from strength to strength since.

It’s absence was felt last year amid the Covid-19 pandemic and despite ongoing restrictions on crowd numbers, we were keen to make sure the game went ahead this year.

Shelbourne FC will abide by government guidelines in relation to crowd attendance but we will stream the game publicly to help celebrate diversity in the game with as many people as possible.

The Pride Cup is part of Shelbourne’s Reds Together programme which involves several ongoing projects helping Shels engage within its Dublin community.

Shelbourne Communications Officer Gavin White said: “It’s fantastic to see the return of this brilliant game at Tolka Park this year again. It was extremely disappointing last year among many frustrations at losing our annual game to celebrate diversity in the game but it makes its return all the better. Shelbourne Football Club is a place welcome to absolutely everyone and this game is a perfect example of this ethos. The Devils’ progress since 2005 has been astonishing and we hope they can continue to grow their wonderful community.”

Dublin Devils FC Chair John Coary said: “As a club we are delighted to have the opportunity to play at Tolka Park again and to line up against some true Shelbourbe heroes. The Pride Cup is a really important event in the Dublin Pride calendar, in helping to promote LGBT+ inclusion in sport, and it’s great to see it return this year. The support that Shelbourbe FC have shown us over the years has been truly amazing and we’re very grateful for their continued support and friendship. That support has been instrumental in allowing us to grow as a club and allowed us to offer an essentiall sporting outlet to the LGBT+ community here in Dublin.”

Formed in 2005, Dublin Devils FC is Dublin’s LGBTQ+ inclusive football team. The Dublin Devils offer a mix of social and competitive football and also arrange several social events throughout the year. They have kickabouts, 5-a-side and 11-a-side and feel the club offers something for everyone.

←    Looking to help out Shels? Join the Club Shop
Shels team up with The Alzheimer Society of Ireland for Football Memories events     →