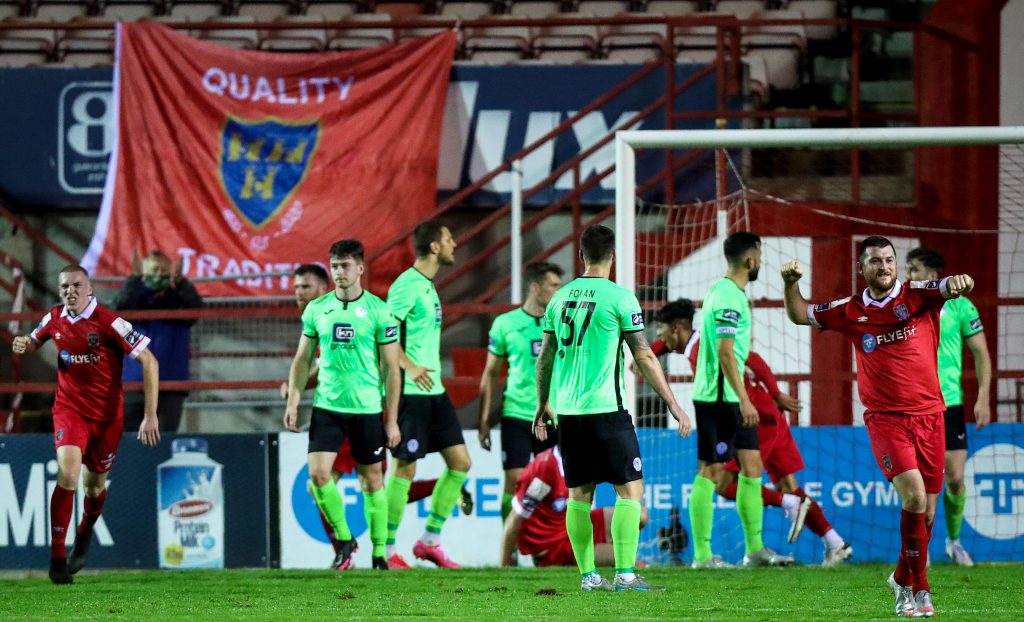 Shels named an unchanged eleven from their game in Dundalk with Denzil Fernandes finding himself making three consecutive starts.

Finn Harps make two changes from their game against Derry City with Ruairi Harkin and Mark Russell dropping out as well as Kosovar Sadiki and Leo Donnellan coming into the Harps starting  eleven.

Shels nearly broke the deadlock in the 4th minute when Ciaran Kilduff’s flick on found Ryan Rrennan whose low cross fell to the feet of Dayle Rooney.

He fired straight at the keeper before Fernandes saw the ball rebound of him and over the bar.

Shels nearly took advantage of a poor free kick from Harps when Fernandes drove through the heart of the Harps midfield before playing the ball out wide to Rooney who fired the ball low across the box. But Fernandes couldn’t quite get the ball under control and only managed to win a corner but a bright start from the hosts.

More chances went begging for Shels when Fernandes broke the defensive lines to find himself one on one with McGintley but Fernandes could only find the torso of the Donegal man.

Finn Harps looked defensively dodgy in the opening half of the game and they were made to pay for that when Kilduff rose highest to powerfully head home from six yards out after a delicious corner from Poynton.

Finn Harps’ main source of attack was coming from long throws in and around the Shels box. They were getting caught out more often then not when Shels broke from most as Harps loaded the opposition box leaving it one on one at the back.

A first half dominated territorially by Shels in which they should’ve went into the break with a much healthier lead then 1-0, Denzil Fernandes would’ve been a standout performer for Shels in the first half often driving at the Harps defence and cauisng them all sort of problems.

Finn Harps drew level when a shot from outside the box was spilt by McCabe and Barry McNamee was on hand to bury the ball past McCabe.

Finn harps were the stronger of the sides in the opening of the 2nd half and looked likely to grab to lead Shels were well off it with the tempo and energy that has become associated with this Shels side wasn’t there.

Finn harps really began to pile the pressure on Shels winning corners and winning every second ball putting their authority on the game.

Shels regained a hold of the game and started getting the ball down and moving it as they pushed for a vital winner.

Shels thought they had a golden opportunity when Dobbs got taken down in the box but the referee had blown his whistle and indicated a free kick to Finn Harps which was sent long and Harps got through on goal.

Luke Byrne took down his man and received a questionable straight red card.

Collie McCabe was called into action when a superb hit from Creataro effort nearly found the top right corner.

The sending off sprung Shels into life as they upped the ante in every aspect of their game but just couldn’t break the deadlock.

It finished 1-1 in Tolka Park with neither team gaining an advantage in the race for survival. Shels are away to St Pats in an all Dublin affair which could be cracker.