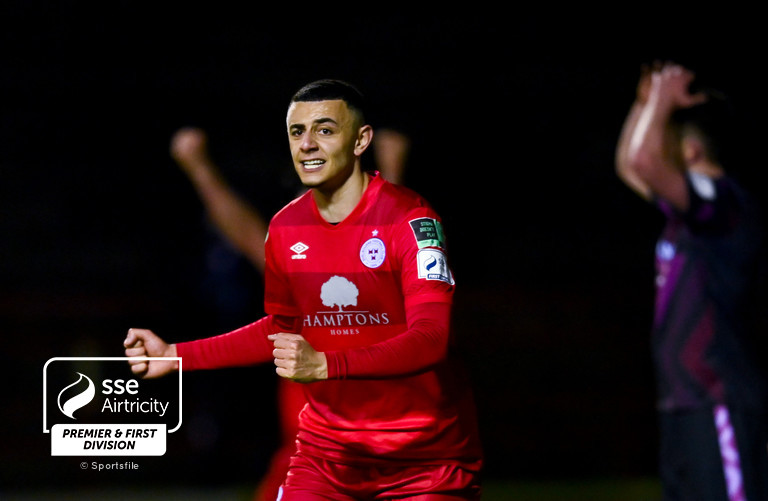 Shelbourne continued their unbeaten start to the season picking up their first win of 2021 with a 1-0 win over Wexford FC on Friday night at Tolka Park.

The Reds were looking for their 1st win of the campaign and knew this was an ideal place to start.

Wexford on the other hand were winless, after consecutive losses to both Cabinteely and Treaty United.

Shels were hoping the form of both Ryan Brennan and Yousef Mahdy could combine to maximum effect, while Youths were looking to see if Luke Turner could showcase his striking capabilities. B

ased on the sides most recent meeting during pre-season, in which Shels recorded a comprehensive 4-1 win, manager Ian Morris could have been forgiven for taking this game for granted.

Shels were to have the first real shot in anger. In the 14th minute, Georgie Poynton had a close-range effort deflected wide after some fine build-up play from the Reds.

This was followed up moments later by a fine break out from the back, only for the final ball to lack the necessary quality, much to the frustration of striker Yousef Mahdy.

The visitors were finding pockets of space, with Dan Tobin impressing in defence and striker Luke Turner particularly impressive.

The visitors were nearly ahead when Wexford’s midfielder Crowley found himself with a yard of space, but his effort was well marshalled by the Shels defence.

Shels were struggling to get a firm grip on the game. Wexford’s Jack Doherty had to receive some attention after an awkward looking challenge but was fit to continue.

In the 44th minute, striker Mahdy fired wide with a poor enough effort. Safe to say the goal feast we were treated to last week wasn’t about to repeat itself here.

At half-time, Wexford boss Brian O’ Sullivan would go in the happier of the two managers, with the game still scoreless. Ian Morris, on the other hand, had his work to do to rally the troops.

The 2nd half started much like the first, with Wexford looking the more likely.

Brennan had an effort, which was skied over before Shelbourne keeper Brendan Clarke almost gave Wexford a gift when he held on to possession for far too long and midfielder Manahan almost nipped in.

In the 62nd minute, the deadlock was broken following a corner, which was diverted into his own net, by the unfortunate Conor Crowley. It seemed as though that was the bit of luck needed. Shelbourne 1-0 up.

Youths boss Brian O’ Sullivan reacted, as Wexford chased an equaliser. On 69 minutes the 1st substitution of the night was made with Kyle Robinson replacing  Jack Larki, to give Wexford more of an impetus going forward.

In the 73rd minute, Shels made their 1st substitute, with McManus replacing Ryan Brennan. Wexford’s Crowley almost made up for his earlier error, but he failed to find the finish required after some neat build-up play.

The game lacked flow for much of the closing stages. Ian Morris brought on Cetiner to replace Mahdy on 87 minutes, with the former UCD player still awaiting his 1st competitive goal for Shels.

Dan Tobin was replaced by Success Edogun for the Youths, with 3 minutes remaining. 3 minutes were added on and the Shels defence stood firm, with Gilchrist and Barker keeping the door firmly shut.

The final whistle sounded much to the relief of the Shels players. The Reds needed that result more than the performance.

Hopefully, a tough victory to kickstart the season. Next up the boys face the long trip to Leeside to face Cork City.

Both sides will be looking to showcase their promotion credentials. Wexford are rooted to the bottom of the table and will be hoping they can get something from fellow strugglers Cobh, next time out.