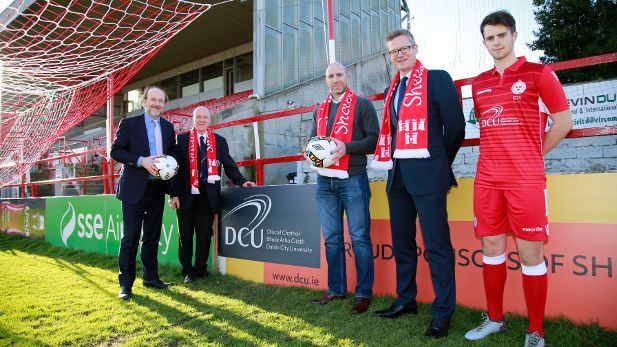 Having recently announced that Dublin City University would become the Club’s main sponsor from 2018, more details of the partnership that is envisaged between the University and Shelbourne FC were revealed at a launch event in Tolka Park yesterday attended by DCU President, Professor Brian MacCraith, and Director of Sport, James Galvin.

Discussions have begun on how we can work together to benefit both organisations and deliver on our mutual objectives in relation to sporting excellence, community involvement and educational opportunities for young players through scholarships and access schemes.

Speaking about the sponsorship DCU President Professor Brian MacCraith said, “DCU is proud to be involved with a club with such a distinguished history as Shelbourne FC. We believe that this project will only strengthen the scope of our engagement with the North Dublin community through our commitment to excellence in sport”.

In addition to featuring DCU’s logo, our home shirt for 2018 also includes a tribute below the crest to our U16 Academy player, Izzy Dezu, who died while playing for the club in December.