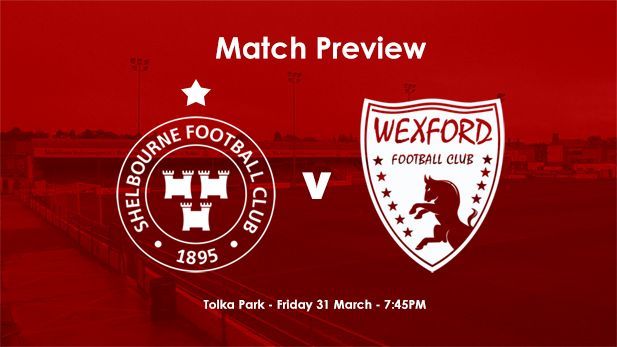 Wexford FC come to visit us in Tolka Park on Friday for the first time since they rebranded from Wexford Youths. The game is scheduled to kick-off at 7.45pm.

Last Saturday saw Shelbourne get their first win of the season, and more than double their goal tally from the first four games, when they completely outclassed a disappointing Athlone Town side at Lisseywollen, collecting the points with goals from Adam Evans 2, James English and Derek Prendergast. Town&rsquo;s only goal came from Alexis Invernizzi.

Friday&rsquo;s opposition, Wexford FC didn&rsquo;t fare so well, going down to two Mark O&rsquo;Sullivan goals, as Waterford FC got back to winning ways (2-0) at the RSC. This resulted in the Blues hitting the summit of the First Division (on goal difference from UCD), while Wexford plummeted to 8th position.

Manager Owen Heary gave his thoughts on the win against Athlone “I thought at the beginning of the game we were a little bit sloppy in our passing, but we kept going, kept trying to get on the ball, kept trying to play. We went one down, came back 1-1 and I thought we dictated the play after that. They had a player sent off just before half time, but we had already started to dictate the play and we knew that if we kept control of the ball, kept passing and getting on the ball, that we would create chances. We did that in abundance I think, second half especially. I thought overall that the team put in a good performance.”

Owen Heary on Friday&rsquo;s game “We&rsquo;ll approach the game like any other. We&rsquo;ll be going into the game looking for three points, as usual. We don&rsquo;t think in terms of anything less. We&rsquo;re likely to be able to call on some of the senior players who are returning from injury and will have benefitted from the extra week&rsquo;s training sessions.”

Shelbourne didn&rsquo;t play the then &lsquo;Youths&rsquo; last season, due to the fact that the Wexford side competed in the Premier Division, having been promoted the previous season.

Shelbourne have no suspensions for this game and Owen Heary can select from a full squad, with the exception of Aidan Collins, with Niall Lanigan rated as doubtful.

Form since start of the season