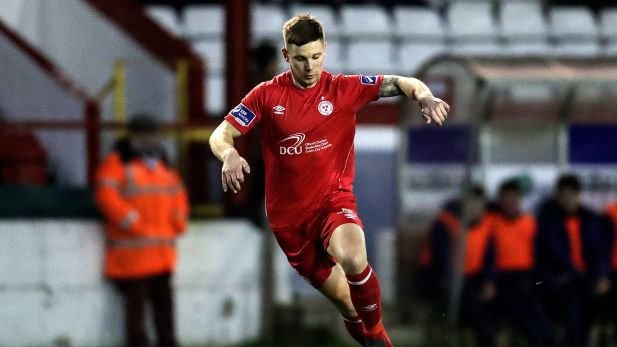 A regular in the Shelbourne team this year, defender Luke Byrne says he has finally got what he was “craving” with the Reds so far this season.

After a couple of injuries in his previous spell at Shamrock Rovers, Byrne is coming into two home games on the back of two clean sheets with Shels and says he has loved playing in Tolka Park where he says “the atmosphere has been really good.”

The Howth man has been unavailable for just one game including pre-season in 2019 and says the team are looking to reward fans for the support they have received this season, most notably in their previous two outings.

“Away against Drogheda, you could hear the noise from the shed end, it was a great crowd and it&rsquo;s something the players feed off. We&rsquo;re looking to give them something to enjoy and hopefully we can have that consistently to help drive us home,” he says.

With a 1-0 win over Bray Wanderers, and a scoreless draw away to Drogheda, Byrne believes the team’s “identity is beginning to show”, but has been pleased by a much improved defensive display.

“Our shape has been much improved, in and out of possession, pressing at the right times, keeping the right spaces between each other. It comes from hard work on the training pitch,” he says. “We were punished for mistakes previously which we&rsquo;ve been culpable for, including myself, but concentration is becoming more consistent for the 90 minutes.”

The centre-half thinks “an inconsistent start” for the Reds to the league has been “frustrating” but is excited about the two upcoming home games to continue on recent good form.

“We knew it would take time to gel, new staff and players but we&rsquo;re starting to show more and more in games, more than just 15 and 20 minute flashes,” he adds.

Byrne, who is studying for a business and management degree, says he has been feeling at home, enjoying Tolka Park, a ground which he has always liked playing in.

“With the four stands, it makes for a good atmosphere, like against Bray which was great. We want to deliver more good results for that crowd,” he says. “It&rsquo;s something the manager has driven home to us too, give the fans something, Shels fans who have been there for years.”

“We&rsquo;ve played everyone bar Limerick so we know where we&rsquo;re at, if you&rsquo;re scared going into these big games then you&rsquo;re at the wrong club. We want to get promoted and come out of these games the right way. We need to embrace these must win games,” he says. “We&rsquo;re confident we have the players to compete.”