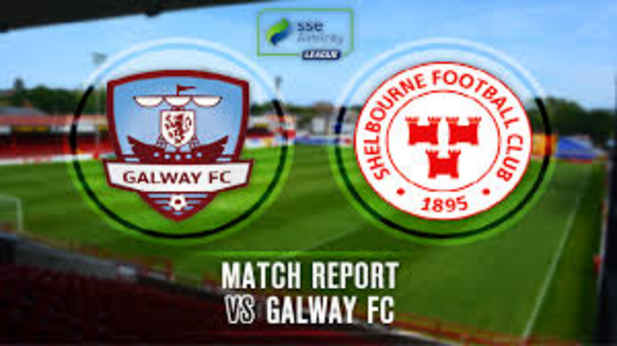 Galway FC pulled off a major heist at Eamonn Deacy Park on Friday evening when they overcame Shelbourne 2-0 in their First Divison, first-leg play-off thanks to goals from Ryan Connolly and Gary Shanahan.

In the driving seat from the off, Tommy Dunne’s men ensured they gave the biggest home crowd of the season a couple of goals to celebrate as well as the small matter of taking a giant leap towards securing Premier Division football.

Chances fell to Ryan Connolly and Jake Keegan in the opening 45 minutes as a 15 minute spell of Galway pressure edged them closer and closer to a goal. But it would take a rash challenge and some crazy officiating before they got their reward as Shelbourne ‘keeper Nathan Murphy cut down Shanahan who was through on goal, and despite scoring, was awarded a penalty instead.

Thankfully for the mental well-being of every Galway fan present, Connolly was coolness personified as he stuck it away to gift them their first goal.

From there, the visiting side began to play with a bit more purpose, but they rarely looked good enough to slice through the defence. Alex Byrne, Paddy Barrett and Connor Gleeson, in particular were phenomenal in shutting down any threats that came within an inch of their collective radar.

At times, the contest became a bit scrappy, and the fluidity of proceedings certainly weren’t helped by the breezy and damp conditions which made the playing surface greasy and caused a number of players to lose their footing at the worst moments.

But it remained a riveting contest and one that had both sets of supporters on the edge of their seats throughout.

And The Reds continued to plug away, albeit unconvincingly, as Dylan Connolly produced two fine efforts from range to give Gleeson a thing or two to think about, before Conor Murphy had a pop. Then, in the 67th minute, Paddy Barrett was unlucky to see a great header cleared off the line by Adam O’ Connor as the trailing side continued to hold on for dear life.

However, in the dying embers of the clash, Connolly, who’s been instrumental all season, once again produced the goods with an inch-perfect pass to set Shanahan up to seal the win, and this time, he made sure his finish counted.

Next Friday sees Shelbourne host Galway at Tolka Park and they’ll be out for revenge. Hold on to your hats, it’s going to be another cracker.