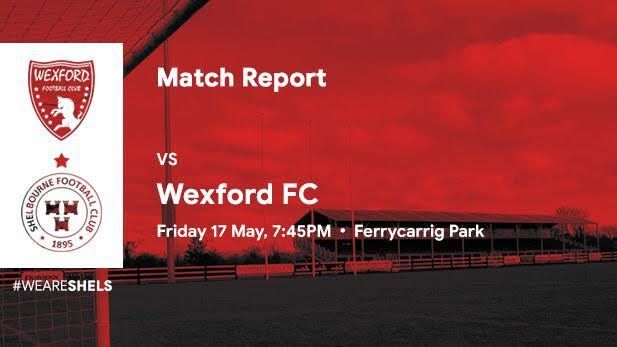 A goal in each half from Aidan Friel and Dayle Rooney earned Shelbourne the points against Wexford FC in their SSE Airtricity League First Division match in Ferrycarrig Park.

Jack Doherty pulled a goal back for the hosts late on, with his sixth of the campaign, but they couldn’t manage to pull off the great escape.

The Reds made most of the early running, with James English turning well in the sixth minute and forcing a save out of Corey Chambers, while the following up Derek Prendergast saw his shot graze the top of the crossbar.

The visitors did get their noses in front in the 17th minute but the goal had a touch of good fortune about it. A clever touch from James English sent Aidan Friel in the clear, he hared down the right wing and his attempted cross deceived Chambers and ricocheted in off the left-hand post.

Shels threatened to add to their advantage, with Ryan Brennan seeing his shot deflected out for a corner and Luke Byrne heading straight at the goalkeeper, but in fairness to the hosts they didn’t let their heads drop and finished the first-half well, with Chris Kenny heading a Jack Doherty corner off target and the latter curling a free-kick narrowly wide.

Dayle Rooney had a couple of sights of goal early in the second half, first volleying wide of the left upright and then forcing Chambers into a full length save to tip his free-kick around the post.

Wexford captain Chris Kenny brought a save out of Colin McCabe in the 76th minute, but he shot straight at the netminder after being teed up by Emmet Nugent.

Shelbourne sealed the deal in the 83rd minute when Ciaran Kilduff pounced on a defensive error and squared to Dayle Rooney, who finished to the net.

Wexford gave themselves a glimmer of hope in the 89th minute when Danny Doyle whipped in a brilliant cross from the right wing and Jack Doherty headed it to the net.

←    Dan McKenna: Tolka crowd is what drives us on
Conor Mitchell leaves Academy due to overseas commitments     →