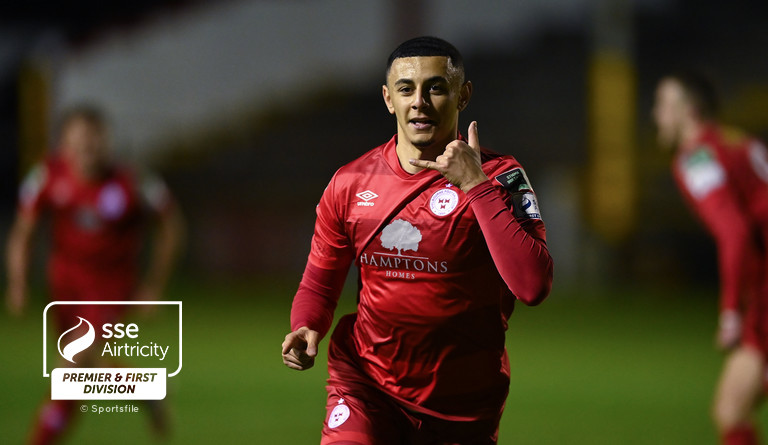 Shelbourne maintained their unbeaten league start against Treaty United, on a lovely Friday evening last in Tolka Park. Both sides came into this tie on the back of unbeaten starts to the campaign. Shels got the better of Cabinteely last time, while Treaty overcame a struggling Cork City side in Markets Field. Goals had been no problem for Shels prior to kick off, but their inability to keep it tight at the back left key question marks. This game came alive in the final minutes, with 3 goals scored in the 90 minute onwards.

The opening exchanges were lacklustre, with both teams trying to establish a foothold in the game. Shels full- back Michael Barker won an early free-kick which came to nothing. JJ lunney looked at ease in position in the middle of the park. Equally, Treaty Midfielder Mark Walsh showed well in position for the visitors. In the 10th minute, the first chance fell to Treaty.  After fine build-up play, Mark Walsh took a shot that was deflected onto the post from 25 yards out. A fright for keeper Clarke, who saw the effort rather late. With 15 minutes gone, Shels best attacking threat was coming from wide men Glen McAuley and Shane Farrell. Up front Michael O’Connor was being starved of quality service. Highlights were few and far between. Treaty winger Jack Lynch missed a header from a floated free-kick with 21 minutes played, after good work Walsh. Treaty were adopting a quite direct approach, with Sean McSweeney showing well to make things happen. Shels were being pinned in. McAuley looked to get in behind Treaty, only for the ball to fizzle to Keeper Tadgh Ryan with 26 minutes gone, this was followed with a speculative effort from McAuley moments later.

With just under a half hour played, Treaty had a great chance, when Mark Walsh took aim from 25 yards out, with his shot being well diverted over by Clarke. Shels game plan seemed to be a counter attacking style. A great piece of inter-play with Lunney and McAuley ended with Treaty’s Walsh taking down McAuley, leading to a booking. Shels passing to feet did improve, with Rooney and McManus in particular looking to slice open the Treaty defence. Treaty did look the more likely and the opening goal arrived on 37th minutes. Some poor ill discipline by defender Maxi Kouogun led to a free kick. The delivery was poorly dealt with by the Reds defence, which left Treaty striker Kieran Hanlon on hand to smash home from close range, passed the stranded Clarke. Shels were looking to respond quickly, with Kevin O’Connor getting a shot in anger, but it lacked conviction. Just before the break Farrell won a free-kick, which was well smothered by the Treaty defence. Half-time left manager Ian Morris with a lot to ponder. Could Shels offer more of a threat in the final third in the 2nd period?

The 2nd half started with Shels looking to get on the front foot. Striker O’Connor was bundled over on the right wing, by Treaty defender Anthony O’Donnell. Treaty’s number 6 was shown yellow by referee Oliver Moran. Shels looked more attacking and manager Ian Morris made a double substitution with JR Wilson coming on for Barker, while Ryan Brennan replaced Rooney with under an hour played. Sub JR wilson made an instant impression and got the Reds on the front foot. Shane Farrell had a fine effort deflected wide and you could tell that Shels were beginning to smell blood. Three corners in succession lead to nothing, with Treaty catching a breath. On 68th minutes Shels had their best chance of the game, with O’Connor getting on the end of a floated ball. The Reds thought keeper Ryan had carried it over the line, after his initial save. The shouts to referee Oliver Moran were to no avail. The most controversial moment for the home side so far. Frustrated, O’Connor was booked moments later. In search of that elusive goal, Shels made another substitution with striker Yoyo Mahdy replacing McAuley, with 75 minutes gone. Treaty made substitutes with Walsh being replaced by Dean George and Hanlon being replaced by McKevitt with 13 minutes left. Shels had chances with both Lunney and sub Mahdy firing wide in quick succession.

Shels had a huge chance to equalise in the 86th minute, with Ryan Brennan having his effort deflected wide from close range. Shels loaded the box in search of a route to goal and Brian Mcmanus found himself free inside the box, but his header missed the target. Treaty’s Clyde O’Connell was booked for a tough challenge. With 90 minutes approaching Ryan Brennan found the equaliser. He diverted his effort from close range and Shels were back level and well deserved for their second half efforts. Treaty made another sub with Ed McCarthy coming on for McNamara. O’Donnell was red carded after a second booking. In the 96th minute substitution Mahdy looked to have won it with a tidy finish. Unfortunately for Shels they couldn’t hold out and with the last kick of the game O’Connell headed home from a corner. 2-2 being the final score. Shels will be relieved to have gotten a point, but disappointed not to have held on. They take on top of the table Athlone next week. That game promises to be a cracker.