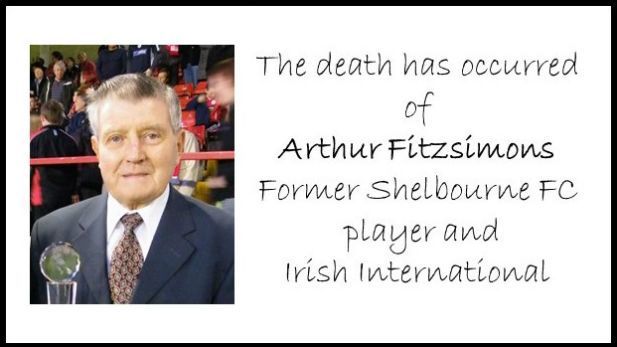 Shelbourne FC has learned of the passing of our ex-player, Arthur Fitzsimons.

From Ringsend, and a product of the great football nursery, Johnville, he had won under-age honours before joining Shelbourne in 1946. He starred with the Reds until he joined Middlesboro in 1949, where he went on to make 231 First Team appearances. He went on to play for Lincoln City and Mansfield Town in England. When his career was over he came home to Ireland and managed Drogheda and Shamrock Rovers for some time.

He played 26 times for Ireland in a ten-year international career.

All at Shelbourne send our deepest condolences to his family and friends.

May he rest in Peace

The following funeral arrangements have appeared in RIP.ie

Reposing tomorrow, Thursday in Quinn&rsquo;s of Glasthule from 5pm to 7pm. Removal on Friday to St. Laurence O&rsquo;Toole Church, Kilmacud arriving for 10am Funeral Mass followed by burial in Deans Grange Cemetery. No flowers, please. Donations, if desired, to a charity of your choice. House strictly private.