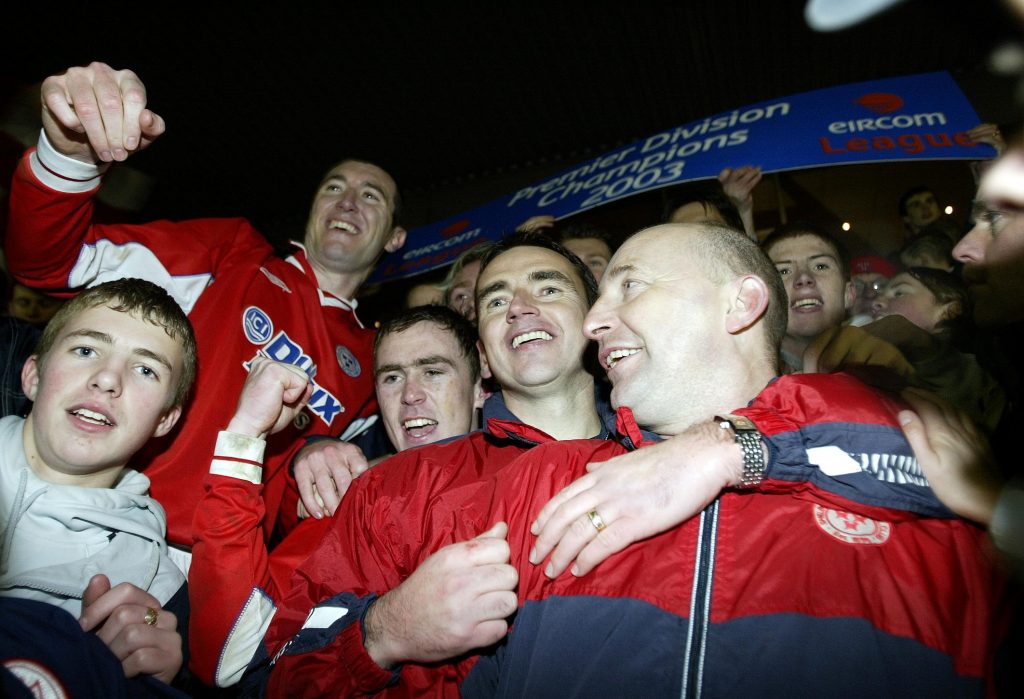 Since football came to a sudden halt in March, the absence of live football in Tolka and around the country has been testing for all Reds. Over the last few weeks, the debate started by the club’s Twitter account around the best ever Shels XI has given Reds something else to focus their attention on.

With the goalkeeper and left-back decided, it’s now the turn of the centre-halves. During the 1990s and 2000s when Shels dominated Irish football, a reliable centre-half pairing was always the backbone of that success: Neville and Scully, McCarthy and Doherty, Hawkins and Dillon. Before that too, some legendary figures anchored the Shelbourne rear-guard.

Today, we’ll look at some of the finest central defenders to ever pull on the famous Red shirt.

Peter Keely is somewhat of an anomaly on this list, as he played in the position called ’centre-half’ when the 2-3-5 formation was standard. That position would resemble a modern defensive midfielder more than a centre-back, but Keely’s status as a one-club man, and his refusal to leave Shels despite an offer of £2,000 from Leeds United, warrant his inclusion on this list.

During his time in Ringsend, the father of future Reds manager Dermot Keely scored 14 goals in 150 league games, earning two League titles, two Shields, an FAI Cup runners-up medal and two inter-league caps. He was inducted into the FAI Hall of Fame at the 1997 Cup Final, when the Reds beat Derry City 2-0.

The backbone of the Shels team famously dubbed ‘Doyle’s Ducklings’ in the late 50s and early 60s, Kilmainham man Strahan dedicated a large part of his life to Shelbourne on and off the pitch. After retiring from playing, he served as club secretary, director and manager in the 1970s and ‘80s.

He won one League title and two FAI Cups with the Reds between 1960 and 1963, and was part of the teams that played against Barcelona, Sporting Clube de Portugal and Belenenses in the club’s early European ties.

Strahan was capped five times for Ireland, and is the only League of Ireland player to score against England since the Second World War.

The epitome of an old-school centre-half, Place made 119 appearances for the Reds between 1965 and 1972. Place was described as the type of defender who, if he sent the ball 50 yards in a tackle, he’d send the centre-forward 50 yards with it.

Unfortunately, his arrival at Tolka came two years too late to pick up a major trophy in a Red shirt. His son, Brendan Jr., had a brief spell with the club in the late 1990s.

Although he achieved many honours after leaving Shels, Paddy Dunning will always be fondly remembered by Reds of a certain generation.

A loyal servant through the leanest period in the club’s history, the red-haired centre-half played 209 league games for Shelbourne. He is one of only two players to play over 200 times for the club without winning a major trophy (the other being Mick Gannon). He picked up FAI Cup runners-up medals in 1973 and 1975, before winning leagues and a cup with Dundalk and UCD respectively.

He returned in 1985/86, attempting to save the club from its first ever relegation, but was unfortunately unsuccessful. He then moved to Drogheda United, where he finished his glittering career by helping the County Louth side gain promotion.

A member of both the Shamrock Rovers team that won four League titles in a row in the 1980s and the Derry City team that won the treble in 1989, the arrival of Neville at Tolka Park in the Summer of 1990 was a statement that the Reds were back.

Neville is one of the most decorated players in League of Ireland history, with six League titles and seven FAI Cups. He was the captain of the Shels team that won the League and FAI Cup for the first time in 30 years. The former achievement was famously marked by his ‘this is for all the doubters’ speech in Oriel Park on the 5th of April 1992.

Neville, who was known for his dominant aerial ability and leadership qualities, made 247 league appearances for Shelbourne. Only three players (Owen Heary, Stephen Geoghegan, Mick Gannon) have donned the Red shirt more times.

Tony McCarthy signed for Shels in 1991 and impressed so much in his maiden season that he attracted the attention of Millwall. Following five years in England with the Lions, Crewe Alexandra and Colchester United, McCarthy returned home and played for Shelbourne for another seven years.

In total, he won five League titles and two FAI Cups. His partnership with Pat Scully was central to the club’s first ever League and Cup double in 1999/2000, as the Reds only conceded 20 goals all season.

Over two spells, McCarthy played 224 times for Shels and later served as the club’s physio.

A product of Arsenal’s academy, Scully returned home to Dublin aged 26 to sign for Damien Richardson’s Reds, who were looking to end a four-year title drought.

In his first season at Tolka, Pat helped Shels to retain the FAI Cup. As club captain Mick Neville’s minutes were phased out the following season, he formed a formidable partnership with Tony McCarthy. Scully scored an incredible 11 goals from centre-half as he was named PFAI Player of the Year in the 1997/98 season, but unfortunately the League title and the FAI Cup both proved elusive at the final hurdle.

Upon Neville’s retirement and Dermot Keely’s appointment as manager, Scully was named club captain. After an inconsistent 1998/99 campaign for the Reds, the club won its first ever double in 1999/2000 with Scully as captain.

Pat left the Reds controversially at the end of the 2000/01 season. As his career wound to a close he moved down the table to sign for Shamrock Rovers, whom he later managed. Scully is widely considered to be the best centre-half to ever wear the Red shirt.

A product of Liverpool’s academy, Artane man Doherty returned home in 2001 to sign for a Reds team looking to replace departed captain Pat Scully. The 6’4” defender’s aerial prowess was unrivalled, as his chant suggests.

‘The Doc’ unfortunately suffered with recurring knee injuries throughout his career, which resulted in him leaving Shels to play part-time with Waterford United in 2005. The next few years were spent with Longford and Bray, before returning to a promotion-chasing Shelbourne in 2009. Doherty immediately re-established himself as a fan favourite, scoring a last minute winner with a bloodied and bandaged head away to Mervue United, but the injury problems persisted and he retired in early 2010 aged 29.

He had a spell as Shels manager in 2015 and 2016, but the financial restrictions the club faced at the time transferred onto the pitch and Doherty stepped down in mid-2016.

Signed from St. Pat’s as a striker, Pat Fenlon immediately converted the Welshman into a centre-half with remarkable success. His partnerships with Kevin Doherty, Jim Gannon and Dave Rogers were a necessary foundation for the attacking football the Reds played in the mid-noughties.

Harris won three league titles during a four-year spell at Tolka. His history as a striker was often a Hail Mary option for Nutsy’s Reds, coming off the bench up front in the final moments of a game to score an equaliser or a winner. His most famous (or infamous) goal in a Red shirt came against Cork City in the Setanta Cup. Had goal-line technology existed in 2006, it mightn’t have counted.

Despite losing his regular starting place to Seán Dillon in 2006, Harris made a pivotal contribution in an away game against his former club in September of that year. With the Reds trying to break a 1-1 deadlock against St. Pat’s late on, Harris came off the bench to head past Barry Ryan and bring Shels three points closer to our 13th Championship.

There’s no doubt that Hawkins didn’t have the same longevity in a Red shirt as some other names on this list, but few could question the impact of his short stay in Drumcondra.

As an established League-winner with St. Pat’s in the late 90s and Bohs in the early 2000s, Hawkins broke the hearts of Gypsies fans when he joined Glen Crowe and Bobby Ryan in making the short trip from Dalymount to Tolka in search of trophies after the 2004 season.

His first season with the Reds was disappointing for the team as a whole, but his contributions promised much for 2006, when he was joined at the heart of defence by Seán Dillon.

That season is remembered by Shels fans for the free-flowing attacking football when players like Jason Byrne, Glen Crowe, Joey Ndo and Ollie Cahill often scored five or six in a game at ease. This attacking style wouldn’t have been possible without the protection provided by the backbone of Heary, Hawkins, Dillon and Rogers.

Waxing lyrical about the careers of these legendary Redsmen was easy. The hard part is naming the best player, or the best partnership.

For starters, Mick Neville is a certainty. Without his ability, leadership and loyalty, the Reds would not have enjoyed the success they did in the ‘90s. His experience of title races and cup finals, especially in ’92 and ’93, were invaluable for a young Reds team.

Who partners Neville is a difficult decision. His real-life partnership with Tony McCarthy was like a well-oiled machine with one old-school, hard-tackling centre-half and a modern, ball-playing (at least by ‘90s standards) one.

The likes of Harris and Hawkins anchored the most successful Shelbourne sides ever, so it would be unfair not to consider them.

However, as mentioned above, Pat Scully has often been credited as one of, if not the best centre-half to ever play for Shelbourne. His real-life partnership with Neville, who is also his partner in this team, provided flair players such as Mark Rutherford, Stephen Geoghegan and Tony Sheridan with the necessary protection to play such an attractive style.

So there it is, the third and fourth selections for the best ever Shelbourne XI are Mick Neville and Pat Scully.

Tune into the debate on this week’s The 1895 podcast. Sign up here.