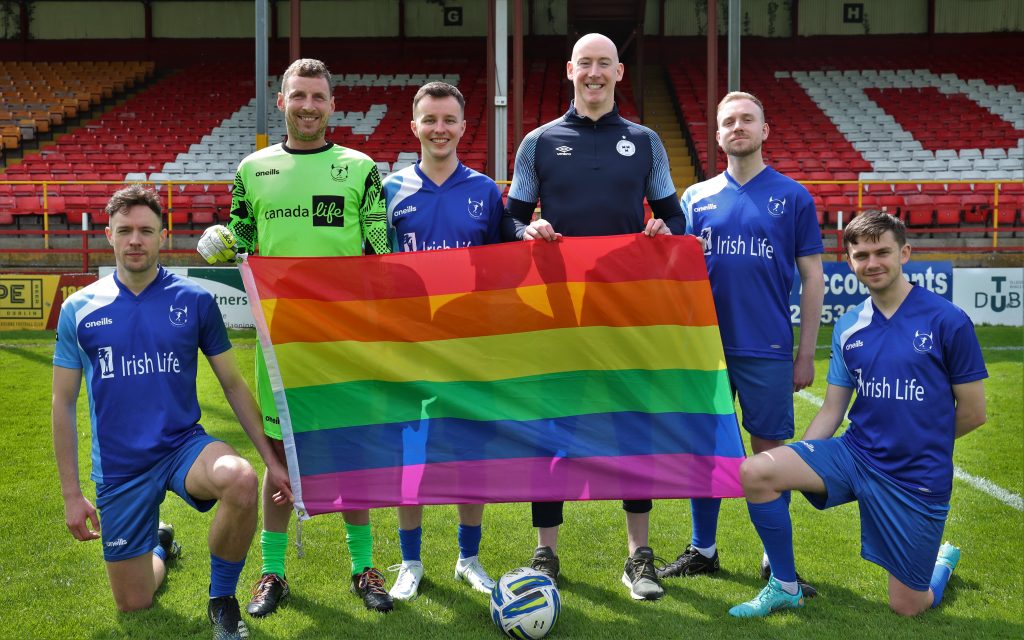 Shelbourne Football Club is delighted to announce the return of the annual Dublin Pride Cup match between Shels and the Dublin Devils.

The match will be hosted at Tolka Park on June 18th, 2022, with a 2pm kick off time. Entry to the game is free for fans.

Since the inaugural match against the Dublin Devils in 2017, the Pride Cup has grown in popularity. The game stands as a celebration of equality and diversity in football and represents the spirit of Pride Month and the Dublin Pride Festival.

The game follows the hugely successful hosting of the GFSN Cup on May 28 at Tolka Park where Village Manchester won the trophy which celebrates LGBTQ+ inclusivity in football after a penalties win over Dublin Devils.

Shelbourne FC Community Officer, John McGouran, said: “We’re very excited to host the Pride Cup once more this year and hope that the event continues our push for inclusivity in football. The Reds Together Programme has built a brilliant network of people interested in extending the principles of inclusion in football throughout the Club and we would like to issue the message once more that everyone is welcome at Tolka Park and Shelbourne FC.

With more coverage recently around LGBT+ professionals in football, it is important that we build on these positive impacts and allow the game to be open to all. We can’t wait to welcome the Dublin Devils again to Tolka Park on Saturday and all who wish to attend.”

Dublin Devils chair, John Coary, said: “The Pride Cup is not only an annual reminder of the strong relationship which we have built with Shelbourne FC and of the on-going support which they have provide to both our Club and to Dublin’s LGBT+ community, but is also an important showcase to highlight how important LGBT+ inclusion in football in Ireland is.

This year with Jake Daniels taking the incredibly courageous step of becoming the first openly gay LGBT+ professional footballer since Justin Fashanu in the 1990s there is a real feeling of optimism that football is finally turning a corner when it comes to LGBT+ inclusion and we hope that this year’s Pride Cup can build on that feeling of optimism and inclusion. As a Club we are delighted to have the opportunity to take the field again against some of Shelbourne FC’s true legends and are looking forward to a great day in Tolka Park.”

Formed in 2005, Dublin Devils F.C. is a LGBT+ and inclusive football club that welcomes anyone who loves football. Dublin Devils have grown into Dublin’s largest LGBT+ football club., and have become an outlet for both sporting and social events. Their driving goal is to promote equality of access to football, providing a place for players, coaches, and volunteers to enjoy themselves. They also offer a home and a sense of community for those wishing to participate in Dublin’s vibrant LGBT+ sports community.