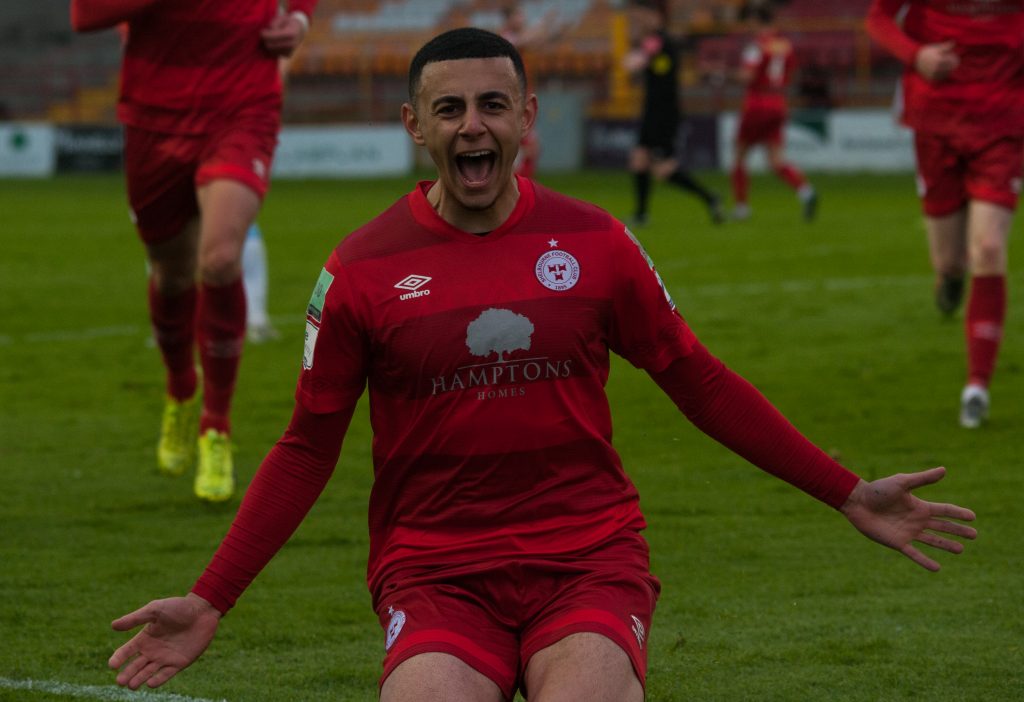 Shelbourne played host to Galway United and ran out easy 4-0 winners at a damp Tolka Park on Friday last. Shelbourne remain the only unbeaten side in either league. Ryan Brennan and Jr Wilson impressed last time out against UCD and manager Ian Morris was hoping his side could sustain the benchmark they had set in their previous 9 games. Galway came into the game on the back of a 1-1 draw against Cork City last time out. Manager John Caulfield would have been hoping players like Conor McCormack and Padraic Cunningham, could cause trouble for the back four of Shels.  Unfortunately on the night they came up against a slicker, more organised and well drilled Shels side, who showed no mercy.

Galway started on the front foot, with Ruairi Keating causing trouble for Shels and winning an early corner. Shels responded with some nice possession, with Yoyo Mahdy and JJ Lunney showing well in the early stages. On 6 minutes reds winger Farrell tried his luck from range but his effort was dragged wide to Galway keeper, Conor kearns’s right hand post, after some nice build up play down the right touchline. Shels midfielder Georgie Poynton was beginning to dictate play and after a few touches in his own half, Shels created a chance on 10 minutes only for defender Kevin O’Connor to needlessly foul Galway’s Shane Duggan.

The next couple of minutes proved lacklustre, with both teams struggling to gain a foothold in the game.  However, Shane Farrell showed his quality, spraying the ball wide to JJ Lunney, who ended up colliding with Galway’s Killian Brouder. On 16 minutes Mahdy showed his potential, dropping his shoulder and lead the United defence on a merry dance. Galway created a half chance, when strikers Ubaezuonu and Place combined, but the resulting shot was dragged wide with 20 minutes on the clock. Shelbourne’s avenue to goal seemed to be via the set- piece route. Kevin O’Connor had resulting deliveries cause chaos in the Galway rear-guard, but unfortunately neither attempt led to a chance of note.

Shels almost had the lead midway through the first-half when Farrell set up Michael O’Connor, spun on the half turn and brought out the best in Kearns, with the ball looking destined for the top corner. However the lead goal arrived on 26 minutes, when a defensive mistake by Gary Boylan gave the ball to Michael O’Connor, who ran at the backline of Galway and his shot was deflected into the bottom right corner. The reds 1-0 up. Galway were well and truly rattled and Nugent was booked for a poor challenge, as Shels looked to press home their advantage. Shels ball retention was impressive and with that the reds looked dangerous at every opportunity going forward.Farrell was taken down outside the box just after the half hour mark. The free kick was deflected wide, but Galway were struggling to get any foothold in the game. Shels had them pinned in. However on 33 minutes Galway created their best chance of note, when a ball was played across the box, with Maurice Nugent seeing his effort agonizingly go wide of the back post. Galway at this stage were asking more questions of the reds defence and a moment of pinball, resulted in a header by Brouder drifting wide, much to the relief of Clarke.

Shels were defensively on top and this was laying the foundations for many of our attacks. The lead was doubled on 41 minutes, when Wilson provided width down the right and pulled the ball square to O’Connor, who had his effort deflected past the helpless Kearns. O’Connor’s 2nd and Shels looked comfortable at this stage. Byrne and Gilchrist were proving a rock at the heart of the reds defence and at half-time Shels went in 2-0 up. Galway manager John Caulfield would have had plenty to say to his Tribesmen at the break, with Galway lacking that creative spark, with midfielders Hurley and Cunningham having their qualities nullified, by the likes of Brennan and Lunney.

The 2nd half started with Yoyo Mahdy winning a free-kick which was easily saved by Kearns. Galway needed more impetus in attack, with Brouder firing in a Rory Delap type throw in, which was well covered by the reds back four. Galway’s Hurley received a booking moments later as Galway looked to get themselves back into this encounter. Farrell  then went through into the Galway penalty area and received a booking for simulation, as his plea for a spot kick fell on deaf ears. Shels extended their advantage on 54 minutes when Yoyo Mahdy swivelled outside the area and found the bottom corner with a fine effort.

At this stage it was proving damage limitations for Galway, as Shels were started to pick their way through at will. Poynton in midfield was giving an exhibition of ball winning ability, which Galway were unable to live with. Galway made a double substitute with Cunningham and Hurley being replaced by Rowe and Waweru, in the hope that the men from the west could salvage something. Galway’s Duggan then received a booking for a mistimed challenge on Poynton. The reds almost had a 4th on 64 minutes, when a ball was lofted into the area, with Kevin O’Connor’s effort just missing the target. Moments later the same player had a free-kick whipped into the area and it produced a fingertip stop by keeper Kearns. Galway’s Ruairi Keating looked the most likely in a disappointing display, but Clarke reacted well to a deflected effort to keep his clean sheet intact. Rowe was making an impression for Galway, but with under 20 minutes remaining Galway needed a mini miracle. However Duggan gave Shels a moment’s concern, when he received the ball outside the area and curled a lovely 20 yard effort just wide of Clarke’s top left corner.

Galway’s Rowe was booked for a late challenge on Poynton, who had been on the receiving end of many tackles throughout. Galway’s Ubaezuonu took out Lunney as the game threatened to boil over. It seemed as though any hope of a Galway fightback was slowly wilting. However Duggan had another Shot deflected just past the post from a set play, with 10 minutes remaining. Shels boss Ian Morris brought off goalscorer O’Connor for Glen McAuley, as he looked to hold onto his side’s advantage. McAuley made an immediate impact getting on the end of a great Shels move involving Wilson and Farrell and McAuley dispatched the pass to the back of the net. Shels in cruise control and 4-0 up. Galway’s race was run and manager John Caulfield made a double substitution with Duggan and Boylan coming off for Christopher and Horgan, with only 4 minutes left. Galway’s patience was tested with Ubaezuonu being booked. Shels brought on Rooney and Barker for Wilson and Mahdy, with 3 added minutes left, followed by Farrell being replaced by Nolan. Shels played down the clock and ran out comfortable 4-0 winners. Shelbourne remain the pace setters in the first division and look like title winners, even at this relatively early stage. They now look forward to an away trip to Bray next time out, while Galway will have a lot of soul searching after that performance. They will be looking for a reaction against local rivals Athlone Town next time out.

←    Checking in with Rebecca Cooke
Looking to help out Shels? Join the Club Shop     →