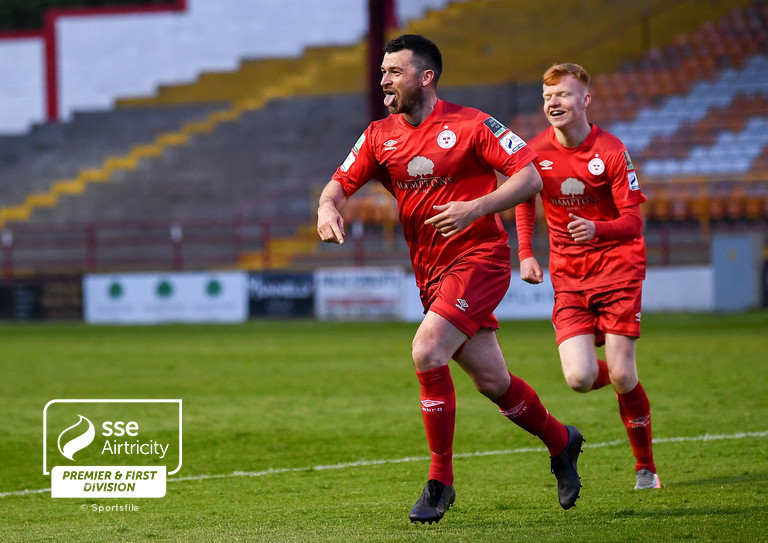 With the passing of former player Alan Keely during the week sending shockwaves through the club, the Reds were determined to honour his memory with an impressive performance. They had numerous chances to make the game safe, which led to a nervy climax, but more importantly all three points.

Shels started brightly and had an early chance with striker Michael O’Connor having an early shot blocked from just outside the box. Yoyo Mahdy was showing well out wide and Shels were pressing high up the pitch in search of an opening. Shels were looking to get the ball wide on every opportunity and on 8 minutes Athlone’s left back Derek Daly was booked for a cynical challenge on reds winger Shane Farrell.

With the game lacking rhythm, right back Michael Barker ventured forward but unfortunately the move broke down. Shels had another shot from Mahdy which was easily dealt with by Athlone keeper Schlingermann.

Athlone’s best route to goal seemed to be by fizzing the ball into feet, to the likes of Byrne and Dylan Hand. The game hit a slump with both teams struggling to break down the respective defences. On 20 minutes Athlone produced the best chance of note, with James Doona producing a moment of quality from range, which just about evaded Brendan Clarke’s top-hand corner.

Shels were let off the hook with successive crosses from Athlone, meaning some last ditch defending from Luke Byrne and Ally Gilchrist, was needed. O’Connor had a header miss the target as both teams struggled to test the either keeper.However, on 33 minutes left back O’Connor was again involved, winning a free-kick from 25 yards out his effort was well saved by keeper Schlingermann, low to his right. Athlone were being pinned into their own half, with Wixted providing an occasional outlet for the visitors, on the counter attack.

The town’s ill- discipline was a serious problem, with Jamie Hollywood being booked after he took out Mahdy on the left, after a lovely bit of combination play. Shels looked the more likely with the defence of Gilchrist and Byrne providing the basis for a controlled first half performance. Gilchrist had a huge chance on half-time, which was cleared off the line, following a corner and both sides went in level at half-time. Shels left frustrated and Athlone relieved to be in contention.

The 2nd half started at a frantic pace, with both sides looking to assert control of proceedings. Both teams weren’t holding back, with a number of 50-50 challenges going unpunished by referee David Dunne. However the next few minutes proved lacklustre for both sides, as they failed to fashion any notable opportunities.

However the deadlock was eventually broken on 55 minutes, when Ryan Brennan found himself free in the box, after an initial pull back from Brennan was blocked and he struck an effort from close range, beyond the despair of Athlone’s Keeper Schlingermann. The reds had their tails up, with Farrell having an effort easily saved. At this point it was a sea of red, as Shels looked to take further control of the game. With just under an hour gone the Midlanders were struggling.

Shels had further efforts fashioned by Brennan and Farrell in quick succession, as they looked to land the killer blow. Much of the improvements from Shels, was down to the playmaking qualities of JJ Lunney in the middle of the park. Lunney was starting to run the show and Athlone were struggling to contain his running off the ball.

Athlone had a moment of danger, when a free-kick was whipped in and luckily for the reds, Clarke nipped to the ball ahead of striker Kurtis Byrne. With 64 minutes on the clock Athlone made a substitution with Stephen Meaney replacing Shane Barnes, while Shels brought on Dayle Rooney for the injured Farrell.

Lunney had a lovely curling effort from 25 yards saved as the game entered the final quarter. This was followed by a header by Mahdy smacking the crossbar, from just inside the box after fine build up play.

Clarke was unfortunate to get away with one moments later after he fumbled a catch, but luckily nobody in an Athlone shirt was following up. Both sides made further substitutions with Shels bringing on Poynton for Ryan Brennan and Athlone replacing Byrne for Jack Reynolds in search of an equalizer.

After a null period further subs were made with Mahdy being replaced by JR Wilson and the Town bringing on McCann for Hollywood. Shels struggled to put the game to bed with Kevin O’Connor having a great chance to wrap the game up, but his effort came back off the post. 3 minutes were added on and you could feel the tension around Tolka Park.

Try as they might, Athlone couldn’t find that killer pass, leaving Shels unbeaten and sitting pretty in the first Division ahead of their trip to Cobh next Friday night. Athlone manager Adrian Carberry will be disappointed with his sides overall performance, as they lacked a real sparke up front. They will look to get back on track next time out against Treaty.