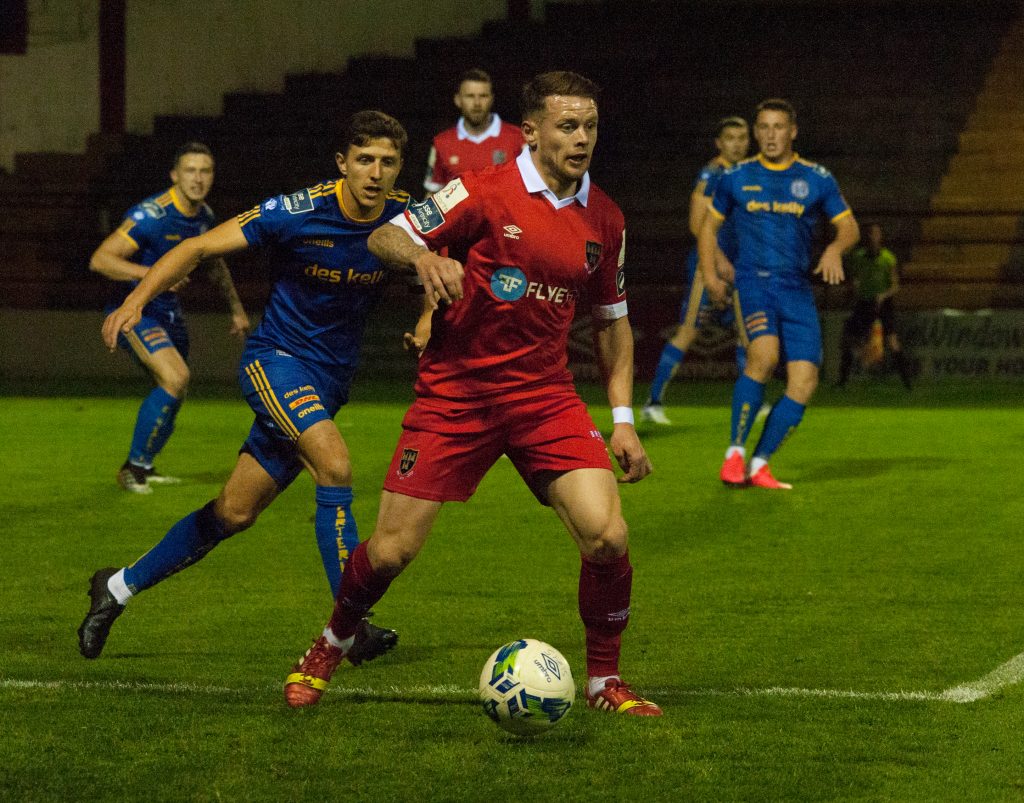 It was a North Dublin Derby like no other. An empty Tolka Park was the setting as it almost felt like the last survivors of a long drawn out war who were slowly able to see the finish line appear in their sights. Both teams knew what they had to do.

With just four game weeks left, Shels sat four points ahead of the drop and a win in the derby would have seen them go seven points clear if results went their way.

The Reds welcomed back defender Luke Byrne who served his suspension in the poor 2-0 loss to Pats in Inchicore a week ago.

He said, rather than defensive issues being the issue, as Shels haven’t conceded that many goals this season, it was more of an attacking problem that his team had.

He jokingly said that there seemed to be a goal of the season competition against The Auld Reds with three worldies conceded in their last three games.

Bohs came into the game in good form after grinding out their last two wins in hard fought wins, beating Sligo with a late goal from Andre Wright as well as rescuing a win from the jaws of defeat against Derry with two goals in added time

As for Bohs, it was just the one change to the 11 that beat Derry City in Dalymount Park last week with Kris Twardek coming in for Promise Omochere.

Bohs gained early momentum, being the brighter of the two sides in the opening ten minutes calmly playing the ball around the Shels half but not producing that moment of magic.

The first real chance fell to Englishman Andre Wright after his lovely turn earned him space and his shot was just too weak and not placed as it was easy for Collie McCabe to gather.

Bohs took the lead in the 28th minute after Bohs caught Shels on a classic counter attack after Wright picked tha ball up inside his own half and flicked a delightful ball through to winger Danny Grant who sped away from the chasing pack and calmly dispatched his shot past McCabe.

Bohs should have doubled their lead soon after a loose back pass from Sheppard saw luke byrne slip letting Keith Buckley through on goal who was unable to fire past McCabe.

Shels should’ve drawn level after Ciaran Kilduff broke the offside trap and beared down on goal but the angle just got too tight for the striker as he saw his shot hit the body of James Talbot.

Bohs went into the break 1-0 up after late first half pressure from Shels seen them relatively lucky to not be 1-1 going into the break.

Shels came out to the 2nd half looking like a new team with new found energy and confidence putting real pressure on the Bohs back four.

Shels gained even more momentum when Kilduff’s cross was knocked down for Mark Byrne whose shot was blocked which looked certain to bulge the net.

Shels won a penalty after a lovely ball from a Georgie Poynton free-kick was going to Luke Byrne who got taken down.

Poynton’s weak peno was saved byTalbot as he got down to his left and parried it behind after a scuffle in the box with Kilduff.

Bohs doubled their lead undeservdly when Georgie Poynton risked a clearance in his own box and lost the ball to Wright who set up Grant for an excellent finish into the top corner of the net.

Bohs wrapped the game up after Wright’s shot was parried out to Danny Grant whos cultured finish beat McCabe to get his hat trick and Bohs’ third.

Shels finally grabbed a goal through Georgie Poynton after his lovely header found the top corner in the 88th minute.

Shels face Waterford next week in a must win game for survival reasons. As for Bohs? They go ten clear of next week’s opponents and close the gap on runaway leaders Shamrock Rovers.