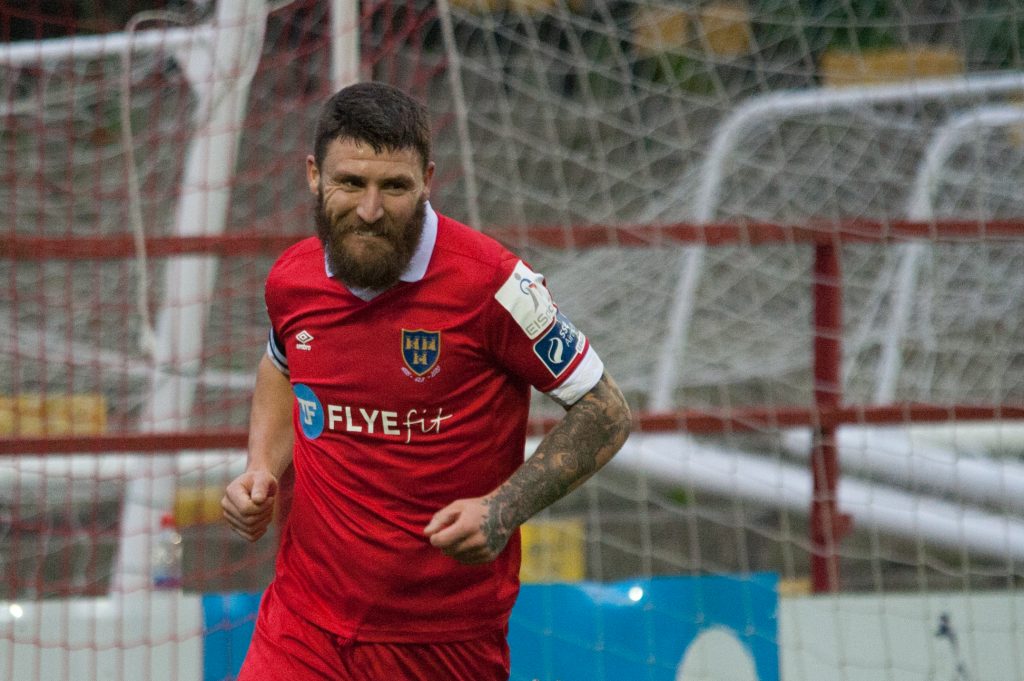 There was a minute of silence observed before the game to pay respects to long time steward at Tolka Park Frankie Monaghan.

Shels almost capitalized on a sloppy pass from Sligo early on after Ryan Brennan intercepted the ball but slightly over-hit his ball as Kilduff couldn’t get to it before McGinty.

A sight Shels didnt want to see was Georgie Poynton down injured after 17 minutes it looked as though he pulled or strained a thigh muscle which may rule him out for the rest of the season and saw Daniel O’Reilly replace  him at right full.

O’Reilly made his presence known early after his lovely long ball to Kilduff who fired a low cross across the box for the oncoming skipper Gary Deegan to fire home his 3rd goal of the season.

Sligo had a real chance to draw level after a decent floated ball into the box was met by the head of Junior who’s header went wide of the post.

Shels shouldve made it two after Ciaran Kilduff out muscled the Sligo defender and set Fernandes free who looked certain to get a shot off but saw his first touch get away from him and go straight into the arms of the onrushing McGinty.

Sligo really should’ve brought the game back to Square one after Jesse Devers played the ball into Ronan Coughlan who fired over from 12 yards out.

Sligo almost drew level after just 45 seconds when De Vries had his shot blocked by a brave Luke Byrne who threw himself in front of the ball.

A second half with chances few and far between which was mainly dominated by the away side but often being left with a 2 on 1 at the back and giving away free kicks on most attacks from Shels.

Shels had the first clear cut chance of the second half after another Messi esc run from Drogheda man Ryan Brennan who found space and time to pick out Dayle Rooney whos header went well over.

Shels were then down a man after Luke Byrne’s rash challenge on Devers saw Byrne see a straight red card issued to him.

Shels made a well needed change to the 10 men on the pitch with Dan Byrne coming on for Denzil Fernandes to regain the back 4 solidity.

Sligo really began to put the pressure on after the sending off and began to test the will of the Shels back four.

Shels played their way back into the game and began to keep the ball in the Sligo half and relieving the back four of defensive duties giving them a well eanred breather at the back.

The Reds were bringing out all the tactics to slow the game down with professional fouls and time wasting at any possibility to take the wind out of the sails of Sligo.

Sligo’s lack of match practice was certainly obvious towards the end of the game as they began to panic whenever they got into a decent attacking position.

Sligo had a late penalty appeal turned down after Junior appeared to be dragged down in the box but the referee seen it that he had go down way too easy.

Another massive win for the Reds and their first back to back wins since they beat Drogheda and limerick last season, which sees them go level on points with Sligo Rovers and St Patrick’s Athletic as they all look up to Dundalk who sit in 3rd place on 22 points.