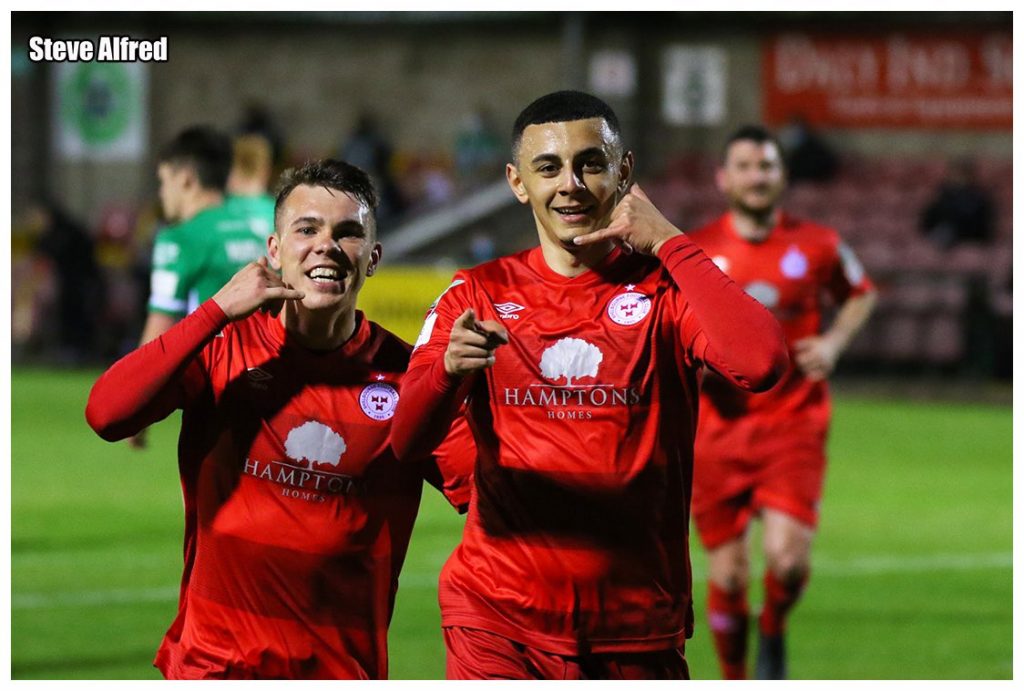 Shelbourne returned to the Capital on Friday night with all three points as goals from Ally Gilchrist, Shane Farrell and Yoyo Mahdy gave the Reds a 3-1 win over Cork City.

The Scot Gilchrist headed home an equaliser after an early Cork peno and Farrell fired Shels into an early second half lead before a late Mahdy peno opened his account for the season.

The Reds maintain an unbeaten start to the season and sit just two points off the top in joint second with UCD in the SSE Airtricity League First Division.

A early dangerous ball played into the box by Gearóid Morrissey led to Cian Coleman having his jersey pulled by Maxim Kougoun. Referee Marc Lynch didn’t hesitate before pointing to the spot. Up stepped McGlade who sent Brendan Clarke the wrong way to give the home side the early lead.

The goal came against the run of play after Shelbourne had the better of the early possession.

Despite the advantage on the scoreboard, Cork were sloppy on the ball and Shelbourne’s high-pressing led to some mistakes at the back.

However, City nearly doubled their lead five minutes later. McGlade’s corner was headed on by Coleman whose effort hit the top of the crossbar.

Playing at a higher intensity with more precision in their passing, Shelbourne equalised in the first quarter. After a run of corner kicks and sustained pressure, Gilchrist headed the sides level. George Poynton’s corner wasn’t dealt with by City and Gilchrist made no mistake from close range.

Shane Farrell had a gilt-edged chance to give Shels the lead after 25 minutes. After a long free-kick was flicked into his path, Farrell, admittedly facing a tight angle, failed to trouble Mark McNulty.

A tough task was made even more difficult for the home side as Walsh was sent off after 30 minutes following an incident involving Farrell. Down a man, manager Healy responded by changing formation – Darragh Crowley now the lone man up front, with two banks of four protecting McNulty.

Crowley, into the side for the injured Cian Bargary, worked tirelessly but was living off scraps for large parts of the evening before being called ashore, replaced by Cian Murphy.

Shelbourne kept the pressure up, creating a number of chances as City were very much on the back foot.

However, Cork resisted the pressure and the sides went into the dressing rooms level at the interval.

Another change of formation from Cork saw them line out with five at the back for the second half – however, the resistance was short-lived after the break as Farrell made amends for an earlier miss just 90 seconds after the restart, holding his nerve to strike low across McNulty and find the bottom corner of the net.

Shels kept the foot on the pedal and Michael O’Connor should have doubled their lead – his 57th-minute free header hitting the base of the post.

Cork remained on the back-foot but brought Beineón O’Brien-Whitmarsh in for the final quarter as they looked for a late equaliser.

However, they were unable to create an opportunity as Shels added Mahdy’s injury-time spot-kick to deservedly take the spoils and keep their unbeaten start to the season going.