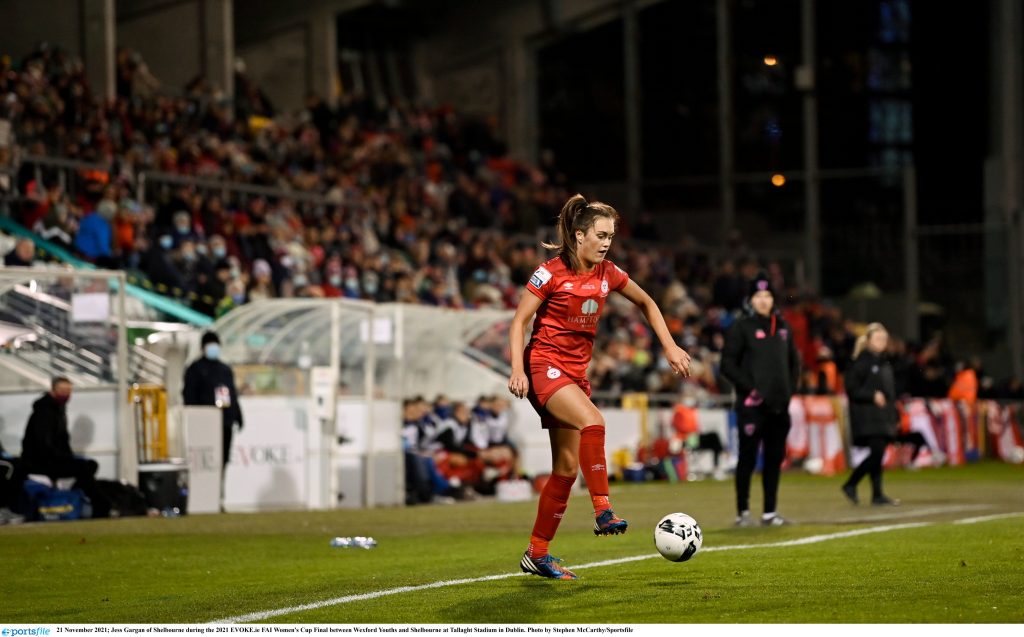 Shelbourne were unable to complete a league and cup double as they fell to a 3-1 defeat to Wexford Youths at Tallaght Stadium.

Lynn Marie Grant opened the scoring in the first half before Shels Ciara Grant responded with an equaliser. Kylie Murphy then gave her side the lead once again with Edel Kennedy later providing a two goal cushion.

The Women’s National League champions remained unchanged from last weeks 3-2 victory against their cup final opposition while Wexford Youth’s made two changes to their starting XI. Edel Kennedy returned as an outfield player after a stint between the sticks at Tolka Park with Ciamh Gray taking her place in goal. Lauren Dwyer was also selected ahead of Lynn Craven in defence.

The opening of the game was tense with neither side able to break each other down. Shelbourne looked to use their width with Jessie Stapleton and Jessica Ziu as their outlets out wide while Wexford Youths looked to win the ball in the midfield and counter the champions.

With both sides cancelling each other out, Stapleton and Ziu switched wings early in the first half as they looked to try and find more joy against the opposing full-backs.

Wexford player Ellen Molloy was first to test the keeper with a snapshot from range while Shels No.3 also struck an effort on target seconds later. Both were easily caught by the goalkeepers.

Rachel Graham was next to have a go at goal but her 25-yard strike went straight down the middle of the net with Gray readily collecting the ball.

Wexford Youths were first to strike when Shels captain Pearl Slattery was booked for a late challenge on Molloy. The resulting free kick was lifted into the box where Lynn Marie Grant was able to loop the ball over Amanda Budden. The No.1 was able to get a hand to the ball but was unable to claw it out from the top corner.

It wasn’t long before the champions responded when Ziu raced behind the defence striking the ball off the post. The ball fell to Ciara Grant inside the box with the No.12 equalising after lifting the ball over Gray’s head.

Rachel Graham was then subsequently handed a yellow card for a cynical foul, preventing a Wexford counter attack, with minutes remaining in the half.

At the start of the second half Wexford Youths retook their lead when Kylie Murphy fired a volley from inside the box. The No.6 was left unmarked as her shot flew into the bottom corner.

Things looked to have gone from bad to worse for Noel King when Budden went down holding her ankle not long after going behind. The ‘keeper received treatment and was able to stay on the pitch.

Saoirse Noonan then looked to make it 2-2 as she race in behind the oppositions back-line but an excellent recovering run from Orlaith Conlon saw her shot blocked by the defender. That would be Conlon’s final action of the game with her last ditch tackle injuring her in the process. She was replaced by No.11 Lynn Craven.

The Youths were forced into another change when goal scorer Grant limped off the field with Tegan Lynch coming on in her place.

Shelbourne then went further behind when Edel Kennedy’s curled effort hit the back of the net to double her sides lead. Kennedy later looked to close the game out but she was unable to convert her shot following the end of a promising counter.

Ciara Rossiter was set through on goal but her chipped shot was inches over the crossbar with just minutes remaining in the cup final.

Molloy then had a chance to make it 4-1 when she raced onto a through ball but Ciara Grant was able to prevent the No.20 from getting a shot away. Wexford were then forced into a third change due to injury with Sinead Taylor taking the place of Molloy who limped off following the challenge.

Referee Paula Brady added six minutes onto the clock following the 90 minutes but Shels were unable to make a late comeback as Wexford Youths were crowned cup champions.