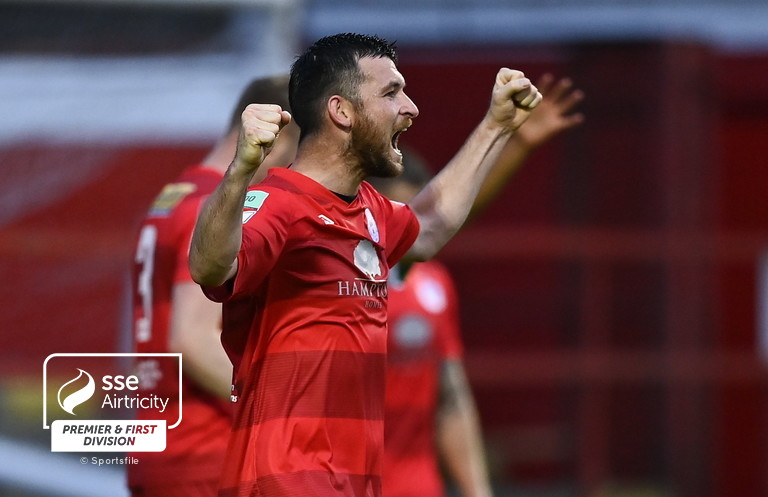 Shelbourne had a hard- fought 2-1 win over Cork City on Friday last, on a night when over a 100 fans returned to Tolka Park.

The win was the Reds’ seventh in a row and they now extend their lead at the top to 11 points over the chasing pack in the SSE Airtricity League First Division.

Goals from Michael O’Connor and Ryan Brennan either side of half time was enough for Shels to get the all important win.

Shels came into this game on the back of a fine away performance away to Wexford FC last time out and remained 8 points clear of Treaty United at the start of play. Shels seem destined for a swift return to the Premier Division, with teams struggling to counteract their high quality attacking play. Cork City on the other hand, had been disappointing after their relegation last season. They sat in 8th place and were hoping to end the reds unbeaten record. Manager Colin Healy would have been boosted by their fine win against Athlone Town last Friday evening. This was far from plan sailing for the Reds.

The hosts started on the front foot dominating possession. In the 2nd minute, Michael O’Connor won an early free-kick following a foul by Cork’s Morrissey. The attacking attitude of Shels was evident, as they looked to get at the Cork backline from wide areas. O’Connor and Farrell showed well in possession. After successive corners and singing from the Shels faithful Cork settled. Holland got in behind the Reds cover, before shooting straight at Clarke, with 6 minutes played. Walker and Baxter combined and Cork began a period of dominating possession. Following good trickery down the right side, JR Wilson won a free-kick which led to an early booking for Cork’s Steven Beattie. Both teams were holding nothing back. You could get a sense with 12 minutes gone that both teams were trying to find their rhythm. Shels centre half Ally Gilchrist was winning everything in the air and without too much fuss. On 15 minutes Rooney got a shot away as the game took shape.

With 20 minutes gone, Cork threatened with O’Brien causing chaos for Shels and drawing a fine stop from Clarke. Shelbourne looked lacklustre with Ryan Brennan giving possession away, much to the frustration of the reds supporters. Striker Michael O’Connor looked our best route to goal. On 23 minutes he mistimed a cross, which looped harmlessly wide.

Cork were growing in confidence and what was noticeable was their persistence with playing out from the back. Coleman and Beattie were showing class in possession, as Shels were continuously being left frustrated. After a moment of misplaced passing by both teams the opening goal nearly arrived as JJ Lunney latched onto a loose ball which flashed just wide, much to the relief of Cork keeper Mark McNulty. With over a half hour gone Ryan Brennan won a free- kick high up the pitch. Dayle Rooney got free down the left, producing fine footwork, before winning a free-kick. The deadlock was finally broken as O’Connor got on the end of the delivery, producing a quality header, with 36 minutes on the clock. Shels looked to press home their advantage and Farrell almost got Brennan in again, luckily for Cork their keeper McNulty came out to command his area. Cork at this stage were struggling to break down Shels, with Poynton and Lunney utilizing their counter-attacks at every opportunity. Shels almost doubled their lead before the break with Brennan hitting a fine volley, following a corner towards goal which was well covered by McNulty. At half-time Shels looked in cruise control. Cork would need to change their style of play, in order to get a result in the 2nd half.

The 2nd half started with Shels immediately threatening. O’Connor had a strike come back off the post and following a corner Shels were unfortunate to see a further effort hit the crossbar. However, Cork would soon equalise when Cian Murphy got on the end of a loose ball, which he dispatched to the bottom left corner, giving Brendan Clarke no chance from just outside the box. Game on. The likes of Murphy and Crowley were beginning to show their class for the visitors, while Shels looked to get more impetus going forward.

Shels retook the lead on 56 minutes, when they won the ball high up the pitch and Ryan Brennan found himself free, before sending a shot low to the bottom right hand corner, past the helpless McNulty. Cork at this stage were rattled and were searching for a positive response with an hour played. Cork were knocking on the door, but Shels continued to keep them at bay. Cork’s Coleman was then booked and the leesiders’ frustrations were beginning to show.

With Shels continuing to pose a threat with Brennan in particular, O’Connor went down injured after a clash in the box. Cork made a change with Whitmarsh being replaced by McGlade in search of an equaliser, with 66 minutes on the clock. Moments later Walsh replaced Holland as Cork were desperate for a response. Shelbourne started retreating as the half wore on and it seemed that there could well be a twist in the tail. With 75 minutes gone Shelbourne were struggling to create, with Cork’s Hakkinen and Morrissey nullifying the ever dangerous O’Connor.

However, Rooney once again found a pocket of space and had a shot well blocked by the Cork defence as the rebels started to tire. Substitute McGlade was then booked when he left one on Wilson, as the game started to boil over. Cork were huffing and puffing without setting the world alight, while Shels seemed happy to shut up shop. Cork boss Healy threw on Kargbo for Murphy, in the hope of finally unlocking the reds rearguard. Shels star Brennan then set up Wilson late on, but his effort drifted harmlessly wide.  Cork pushed forward but were limited to a strike from Morrissey, who flattened to deceive. With 3 minutes added on Shels hung on by the skin of their teeth. McGlade had a fine effort well saved by Clarke, before referee David Dunne blew the full-time whistle. Shels will be delighted with the win, but were made to work for it all the way, by a plucky Cork side. Shels remain on top of the First Division and will play host to Cabinteely next week, while Cork will take much encouragement from their showing and will play host to Treaty United next time out. A great result for the returning Shels faithful.