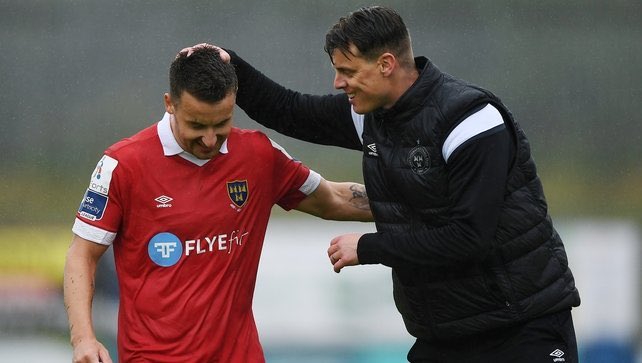 Finn Harps slumped to a third loss in a row with Shelbourne taking the spoils at Finn Park as they nicked a 1-0 win on Tuesday evening.

A first half goal from Ryan Brennan was enough to seal the three points in tricky conditions for the Dublin side.

Possibly testament to the poor conditions was the dismissal of Karl Sheppard after 11 minutes after the forward slid in dangerously on Kosovar Sadiki for a 50/50 challenge leaving Damien McGraith no choice but to give the Shels man his marching orders.

The Reds, to their credit, looked equal to Harps even with one less man on the field and they got well rewarded in the 29th minute with a goal from Ryan Brennan.

Aidan Friel started the move with a simple ball played to Alex O’Hanlon who cut in from the left and booted the ball high and long toward the back post where Brennan was able to meet and nod it into the bottom corner.

Alexander Kogler went close for the home side in the 39th minute when he took up the ball and managed to hold on to it with Shelbourne defenders quickly closing him down. The forward was under intense pressure as he got his shot off and his weak effort was easily saved by Colin McCabe.

A great defensive effort from Sam Todd just before half time kept Shelbourne from doubling their lead. A great pass across the Harps box was coming into the path of Aaron Dobbs for a simple shot on goal but the defender slid and just managed to nick the ball behind for a corner.

The second half somehow began worse than the first and it took over 10 minutes for even a semblance of a chance to be created by either side.

Some good play by Harps saw Mark Coyle spread the ball out to the left to Mark Russell, his cross was on its way to the head of Karl O’Sullivan who was perched in front of goal but the Shels defence just managed to shuffle across and deflect the ball behind.

O’Sullivan went close in the 69th minute after being played in towards goal with a deft pass as Ollie Horgan’s men started to take control of the game. The midfielder wound up the shot but McCabe had every bit of it and batted it away from goal.

Disaster was averted by Shelbourne deep in injury time when a wayward cross was almost turned into the goal by Daniel O’Reilly. The defender’s blushes were just about spared as the ball nicked over the crossbar.