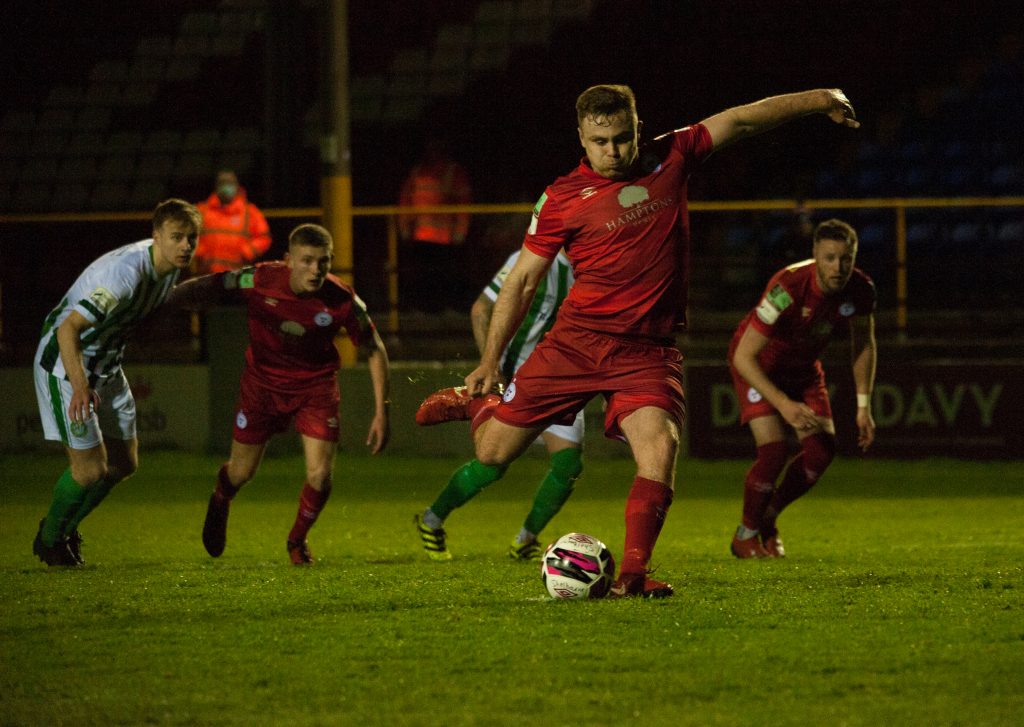 Shelbourne played out a 6 goal cracker with Bray Wanderers in their opening home game of the 2021/2022 league of Ireland first Division season on Friday night, in a dry but cold Tolka Park. Both teams came into the contest on the back of 0-0 draws last time out, with Shelbourne claiming a point away at Galway United, while Bray were held by Treaty United at the Carlisle Grounds. Shels were hoping that their fortunes would change after Glen McAuley was sent off last time out. This was far from a dower affair.

The opening exchanges were cagey with Bray winger Ryan Graydon winning an early free-kick after some neat trickery before Shels midfielder JJ Lunney caused havoc down the left drawing a save from Brian Maher in the 9th minute. Shels shouts for a penalty fell on deaf ears. Shels broke the deadlock on 14 minutes following a free-kick which was saved by  Kevin O’ Connor and  George Poynton’s effort was deflected past the helpless Brian Maher. The game was fiercely contested with both teams not afraid to shove their weight about.

Shels were guilty of playing out from the back too often and after a lapse in concentration by centre back Maxi Kouogun gave the ball away and following a fine initial save from Clarke, the rebound fell to Bray’s Brandon Kavanagh who made it 1-1. Bray manager replaced Gary Shaw with playmaker Luka Lovic. However, on 27 minutes, Shels lead was restored thanks to a fine finish from playmaker Ryan Brennan, looping the ball over Brian Maher.  Shels back in front.

Bray at this stage were rattled and following some promising build-up play, Shels striker Michael O’ Connor nibbed in ahead of Bray Centre-back Andrew Quinn before being taken down. Bray’s number 4 was lucky to stay on the pitch. Just before the break their Goalkeeper Maher collided with Brennan but was fit to continue. Shels went in the happier side at half-time leading 2-1.

The 2nd half started at a frantic pace, with Shels striker Michael O’ Connor getting in behind, but he failed to pick out an onrushing teammate.  Meanwhile, Bray midfielder O’ Farrell tested Clarke at the other end. On 51 minutes Bray’s midfielder Graydon got in between the two Shels centre-halves before slotting cooly past the helpless Clarke. Shels nerves were shot and on 57 minutes Brandon Kavanagh had his 2nd goal of the night, striking an absolute cracker from 30 plus yards out into the top right corner.

With just under a 3rd of the game left, Shelbourne manager Ian Morris made a host of changes with Brennan coming off for Alex Cetiner and striker Mahdy coming off for Denzil Fernandes in search of a more attacking threat. The next 10 minutes proved quite frustrating with Sean Quinn missing from close range. On 75 minutes Shels were level again when the referee gave a penalty for a soft enough challenge. Fortune favoured Shels from the spot-kick, as Maher got a decent hand to the ball, but Poynton’s luck was in and the ball ended up in the net. Dayle Rooney replaced JR Wilson with 13 minutes to go. Sub Fernandes was then yellow carded as the game threatened to boil over.

With 5 minutes of added time, both teams could have so easily won this game. Shels had a corner that was dealt with and Bray broke, but the final pass lacked quality. The final score ended 3-3. We move on to Wexford Youths next Friday. Shels will be relieved they didn’t lose that game and Bray will be satisfied with a point away from home. Let’s hope it is another belter.