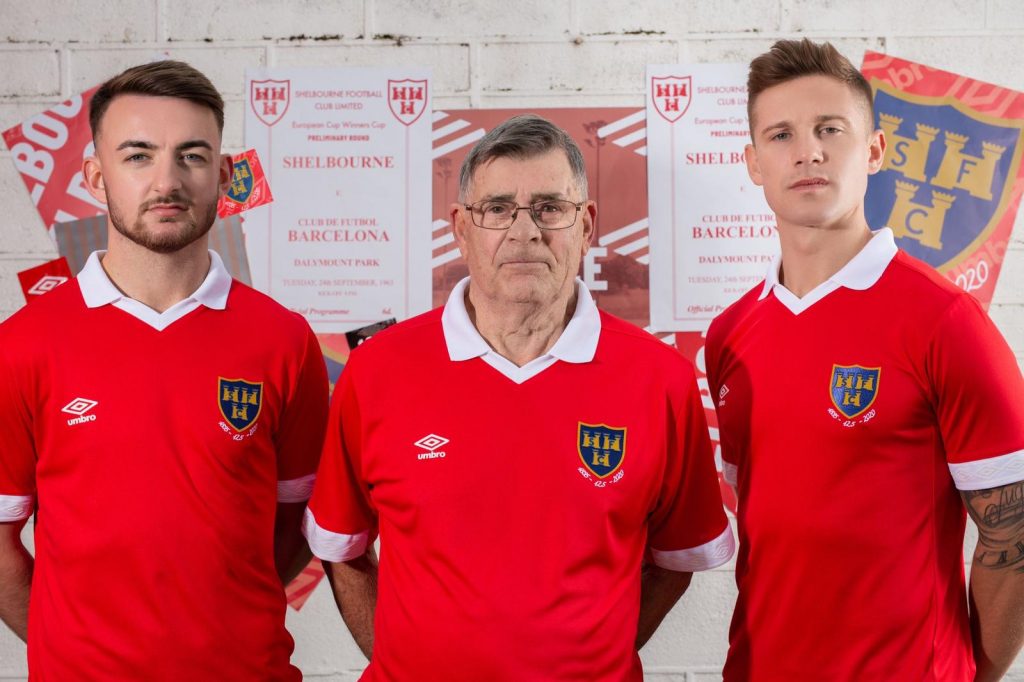 Shelbourne FC has released the new Umbro Home Kit for the 2020 campaign. The 2020 season will see Shelbourne FC return to the top tier of the SSE Airtricity League for the first time since 2013. The kit pays homage to the club’s 125th anniversary in 2020 by including a specially commissioned 125th anniversary crest.

The crest takes inspiration from one of the club’s most exciting periods in the early 60s, a period when Shels played against some of Europe’s top clubs. A game of note in this era was our European Cup Winners’ Cup tie with Barcelona in 1963, which featured a blue crest with gold castles as featured on this year’s kit.

Jonathan Courtenay, Managing Director of JACC Sports, Irish Licensee for Umbro, said: “We have worked closely with the club over the past year and when you hear the strategies they have in place their success comes as no surprise to us in Umbro. We are delighted with the look of the new home kit for the club.

“It has the retro feel we were looking for to help commemorate their 125 years in existence. This is largely due to thereference to the old 60s crest and the fans kit being made available without a sponsor. We look forward to seeing the club wear this kit next season as they continue to build on the great work done by the club in recent years.”

Dave O’Connor, CEO of Shelbourne FC, said: “Shelbourne FC is delighted to team up with Umbro once more for the 2020 season as we move into the SSE Airtricity League Premier Division. Last year’s collaboration was extremely successful for the club and Umbro and so we are very excited to be partnering with them again for the 2020 season for all of our teams, men’s, women’s and academy teams again.

As well as heading into 2020 on the back of our promotion last year, we are excited to celebrate our 125th anniversary as a club with this special kit in collaboration with Umbro. We hope that our supporters will appreciate the attention to detail with in this kit and the reference to the clubs illustrious history and heritage.

With the club crest referencing our famous European fixture with FC Barcelona in 1963, we hope the new kit demonstrates the long and storied tradition within the club that we look forward to building on in 2020.”

The new Home Kit will be available from the Club Shop Saturday October 26 from 11am to 3pm and is available online now.