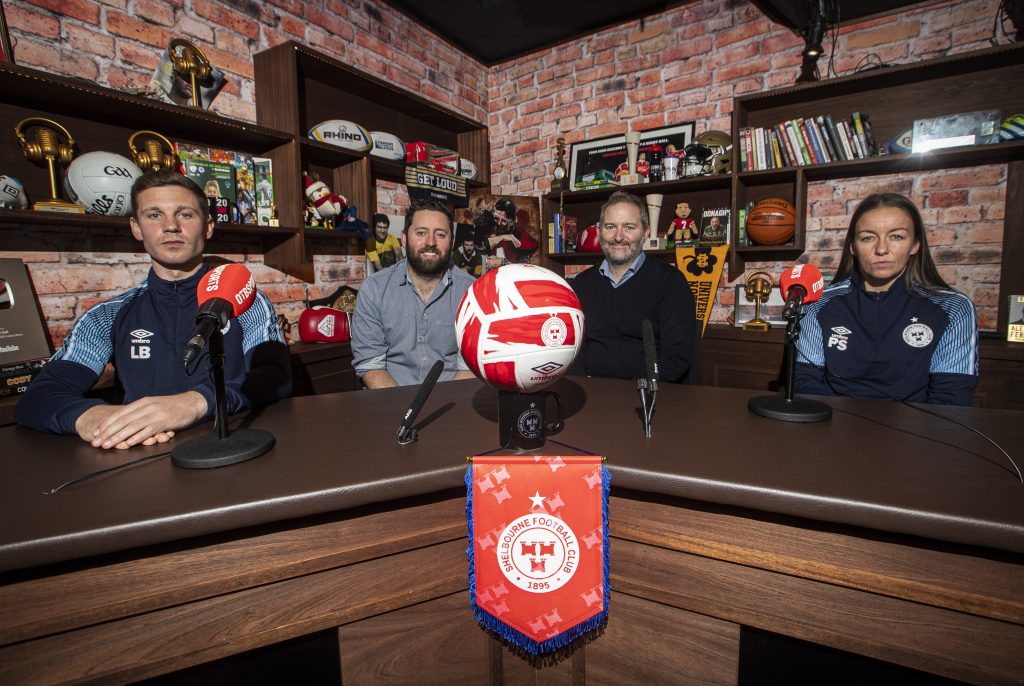 The multifaceted partnership will see Shelbourne and Off the Ball join forces through exclusive feature interviews, podcast collaboration, online editorial content and exclusive access to players on both Shelbourne’s SSE Airtricity League Premier Division and Women’s National League teams for the 2022 season.

With Shelbourne FC Men’s First Team Head Coach, Damien Duff taking over the reigns at Tolka Park for 2022, Off the Ball will hold three exclusive feature interviews with the new Reds boss over the course of the season.

Shelbourne FC will also benefit from use of state-of-the-art audio production facilities to record podcast material including the weekly The 1895 Podcast featuring broadcaster Darren Cleary and a wide range of Shels guests.

Other elements of the partnership will include:

Shelbourne FC Head of Media, Gavin White, said: “This announcement is a significant moment for our Club as we look to grow the Shelbourne brand ahead of an incredibly exciting season at Tolka Park in 2022. With Damien Duff taking over our Men’s First Team and our Women’s National League team looking to defend their Champions title, as well as the UEFA Women’s Champions League campaign to look forward to, it’s an incredibly exciting time at the Club. Off the Ball are the leading sports broadcast platform in the country and thus match our vision for excellence in all facets of the Club. It also represents a milestone for our media team with superb talent from the experienced broadcaster Darren Cleary and co working tirelessly to provide value to our Club platforms. We’re very excited to work with Ger, Nathan and the whole Off the Ball team.”

Off the Ball Managing Director, Ger Gilroy, said: “We’re delighted to be working with Shelbourne Men’s and Women’s teams as they build on their recent success. This partnership is important for us as we ramp up our coverage across all parts of the game in Ireland. Shelbourne’s brilliant supporters initiatives during the pandemic were a real signal of the depth of love that football fans in Ireland have for their clubs and our coverage will always try and reflect that. We can’t wait to help bring the stories of Shelbourne’s season alive.”

About Off the Ball

Off The Ball is the leading multi-platform sports media brand in Ireland. Founded in 2002, the company has consistently brought both the biggest names in Irish sport and the biggest stories.

Our large portfolio of shows include:

Off The Ball’s radio show is broadcast weeknights on Newstalk and OTB Sports Radio (7-10pm Monday–Thursday and Fridays 7-9pm), featuring sports news, review and analysis as well as providing your weekend sports fix with live commentaries and discussion on Saturday and Sunday from 1pm-6pm.

OTB AM (7.30am – 9.30am) is our ever growing morning show bringing viewers analysis and previews across all sports, as well as interviews with the big names in Irish sport. The show is available across our social channels, whilst many choose to listen live on OTB Sports Radio

Moving our business model in line with a more digitally led audience, our content is delivered daily across all of our social channels.

Off The Ball is part of Bauer Media Audio Ireland, the largest independent radio group in Ireland operating some of the best known radio brands throughout the country.

Whether it be Newstalk, Today FM, 98FM, Off The Ball or the two Spin stations, if you’re looking for music, entertainment, news or sport Bauer Media Audio Ireland is there at scale.

Across our brands we broadcast to over 1.6 million adults each and every week meaning that nearly 1 in 2 people across Ireland listen to a Bauer Media Audio Ireland station!

Off The Ball is part of Bauer Media Audio Ireland, the largest audio publisher in Ireland operating some of the best known radio brands in the country.

Including Newstalk, Today FM, 98FM, Off The Ball, Spin 1038, Spin SouthWest, and GoLoud, the home of Irish podcasts.

Across our brands we broadcast to over 1.75 million adults each and every week meaning that nearly 1 in 2 people across Ireland listen to Bauer Media Audio Ireland content.

Across our brands we broadcast to over 1.6 million adults each and every week meaning that nearly 1 in 2 people across Ireland listen to a Bauer Media Audio Ireland station!