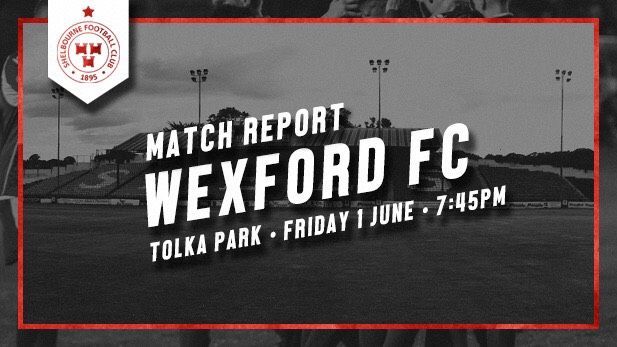 Shels, looking for their first home win in a month, started brightly and in particular Adam Evans who looked threatening right from the off.

And it was this particular avenue in which got the home side in front after just eight minutes. Evens showed tremendous pace to round Liam McCartan, but his low cross was turned behind. From Cian Kavanagh&rsquo;s resulting corner Shane Farrell nodded home, but there will be questions of just how much he knew of it as it seemed to go in off the back of his head!

Home fans thought they had doubled their lead when Lorcan Fitzgerald whipped in a dangerous free kick, only for Alan Byrne to see his header go millimetres wide as the home side began to exert their dominance.

The home side deservedly doubled their lead in the 33rd minute. Left-back Fitzgerald again whipped in a cross from the left wing and up rose Prendergast like a salmon to head back across goal and in off the post.

Wexford, who had an encouraging draw against Finn Harps last time out, did look a threat in behind through Aaron Dobbs but was unable to put the finishing touches his general play deserved.

The visitors must have gotten the hairdryer treatment at the break as they came out flying. Snapping into tackles, getting first to every ball and made it 2-1 six minutes in. Following some scrappy play on the edge of the box, up stepped Dean Kelly to unleash a thunderbolt from 25 yards that could only hit Dean Delany’s hand as it flew past and it was game on.

The home fans unrest was put at ease when Prendergast put his side 3-1 up with almost a carbon copy of his goal in the first half. Fitzgerald delivery to the back and the big centre-half nodded home past the helpless Gaffney.

The game was put beyond doubt when Owen McCormack was helpless to avoid David O&rsquo;Sullivan&rsquo;s low cross as the ball deflected into his own net as the home side kept pace at the top of the league.