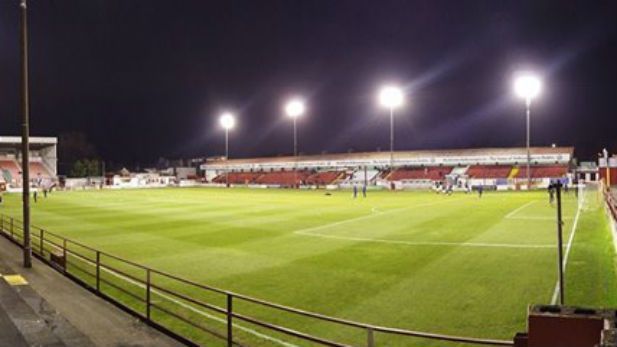 Derek Prendergast scored what could prove a crucial goal in the First Division title race with an 85th minute winner to hand Shelbourne a 2-1 win over Drogheda United at Tolka Park.

There was little to separate the two sides over the 90 and a bit minutes on a rainy Northside Dublin night but the home side&rsquo;s new found grit and determination saw them scramble over the line once again this season.

Shelbourne took the lead in the 16th minute thanks to a lovely move by Aidan Friel that saw the full-back cut inside and across the pitch, play a lovely one-two, and clip a ball into the centre of the box where Ciaran Kilduff was on hand to head home.Drogheda had a chance to equalise just minutes later when Luke Gallagher found Chris Lyons near the penalty spot.

The striker managed to get to the ball without his marker but he couldn&rsquo;t fully trap it and a covering Shels defender got back to clear.

The visitors had another chance soon after when Conor Kane broke down the left and pulled back to find Stephen Meaney standing in acres of space just inside the box.

He hit it first time towards the bottom corner but Colin McCabe got down low to palm behind for a corner.With the first half drifting into injury time, it looked like the Dublin side would be heading into the break in front.

That was until Oscar Brennan took down Chris Lyons 25 yards from goal. Sean Brennan&rsquo;s first effort was blocked by James English but it landed back at the feet of the man who experienced relegation heartache with Shelbourne in 2013.

This time around he connected sweetly to fire a sublime half-volley first time into the back of the net, giving McCabe no chance.Shelbourne started the second half slowly and Drogheda could have taken the lead if they&rsquo;d done better with a couple of half chances they created.

It was end-to-end stuff during the second period with a share of the spoils looking most likely, until Lorcan Fitzgerald&rsquo;s free from deep was nodded on by Luke Byrne for Prendergast to head past Luca Gratzer and send the Tolka Park stands into raptures.

The home faithful are starting to dream about finally returning to Ireland&rsquo;s top division.