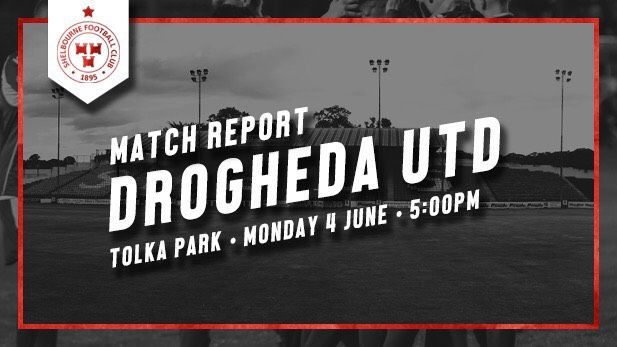 There was late drama at Tolka Park on Monday afternoon with an injury-time penalty handing Drogheda United a share of the spoils.

Shels looked set to move to within a point of their fellow promotion hopefuls thanks to Dayle Rooney’s fine finish in the 75th minute. However, the home side was reduced to ten men five minutes later for a second bookable offence and Mark Doyle won a penalty after he was hauled down by Dean Delany when put through clean on goal.

A poor first half saw little chances of note but Cian Kavanagh probably should have given the home side the lead after just 10 minutes when James English’s delightful cross found him free in the box.

His header, however, was straight into the keeper’s gloves. The second half more than made up for the first in terms of incident but mostly for the wrong reasons. Byrne’s dismissal left a gap in the middle of the Shels midfield and Drogheda took advantage by playing Doyle through.

He proceeded to round Delany but fell to the ground before he could get a strike away. The visitors were screaming for a penalty but the home team called dive. After consultation with his linesman, the referee pointed to the spot and Brennan duly obliged.

Amongst the fracas, Owen Heary was sent to the stands for protesting the decision.