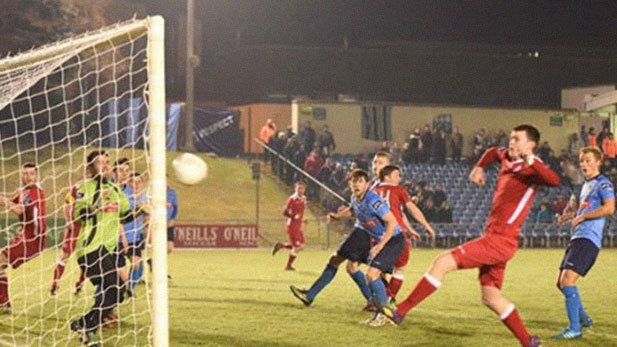 Congratulations to Sean Heaney on his call-up to Paul Doolin’s Ireland Under 19s. He is one of only two home-based players in the squad.

Sean, along with Jamie McGrath from St.Patrick’s Athletic are the sole representatives of the SSE Airtricity League namedin the squad for the forthcoming UEFA U19 Championships Elite Qualifying Round.

McGrath and Heaney are the only Airtricity League players in the 17-man panel, which also includes former Mervue United and Galway United striker Ryan Manning, currently at Queens Park Rangers. One more player will be added to the squad as West Brom defender Shaun Donnellan misses out through injury.

Pat’s midfielder McGrath recently came to prominence when thesecondof his two goals in a 6-0 thrashing of Azerbaijan in a friendly at Tallaght Stadium did the rounds online, while on loan Shamrock Rovers defender Sean Heaney has started in Shels’ first three competitive games this season – with the Reds keeping cleansheets in all three. Heaney also netted his first goal for Kevin Doherty’s side in a1-0win over UCD at Belfield (attached picture by Maurice Frazer)

Doolin’s side will travel to Germany for the Elite Phase which will take place between March 26 and 31. The Boys in Green face the Czech Republic on the opening day, before meeting their German hosts onMarch 28. Three days later, they wrap up their group fixtures with a game against Slovakia.

Only the group winners in the Elite Phase will reach the eight team tournament in July, with Greece qualifying automatically as hosts. Having come through the first round of qualification unbeaten – the Republic of Ireland hosted the first group stage in Wexford and Waterford, and finished second to Switzerland on goal-difference – Doolin believes his players should have no fear going to the home of the current u19 European champions.

“The players have every right to feel they can go there and do well. They have scored 21 goals and conceded six in ten games. They are an excellent group of players,” Doolin told theFAI website.

“All of the teams we play here will be strong but this season we’ve improved game after game. We expected to get out of the first phase and we did so playing good attacking football. The players have improved no end since the first game.”

Republic of Ireland u19 squad: