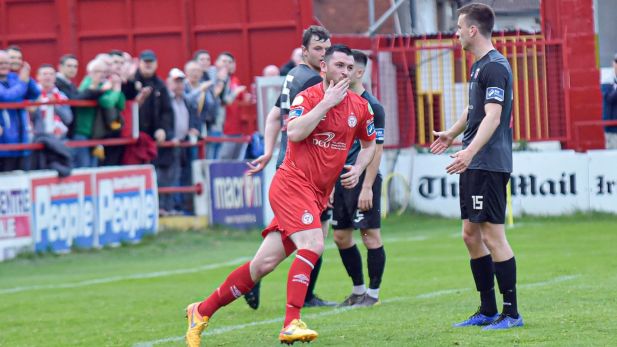 After his fifth league goal of the season last week against Cobh Ramblers, Ryan Brennan says this Shels team wants to “create our own legacy” at the club this season.

The Reds, who sit on top of the SSE Airtricity League First Division table, welcome second place Longford Town tomorrow to Tolka Park in a game the number 10 describes as “massive.”

His journey to Shels started after a holiday with team mate Karl Moore in Rome where he was put onto Shels boss Ian Morris, whom he talked to for an hour and whose plans for the club Brennan soon realized he “wanted to be apart of.”

“Whether it&rsquo;s winning the league, promotion we know we will give 100% until the very end,” Brennan told shelbournefc.ie.

Since coming to Tolka Park, the attacking-midfielder, who has also played up front, says he has been impressed by the squad around him, enjoying partnerships with those around him. “Not just our one to eleven, but the lads who come on then from the bench have real quality. We now we haven&rsquo;t really played that well in the last couple of games but we&rsquo;re still grinding out results, showing that doggedness which shows the quality we have around the place,” he says.

The seasons efforts have also been helped by the younger players in the squad who Brennan believes are “really talented” and “could go anywhere in the game.”

Originally from Drogheda, Brennan says the First Division has been “overlooked” in recent years but thinks the competitiveness this year has taken people on the outside by surprise. “On any given day, any team can beat anyone, which just goes to show the strength in the division,” he says.

Brennan feels the Reds were unlucky to lose in Longford last time, with himself having a ball cleared off the line with ten minutes to go but he says the “breaks even themselves out over the season.” Still, he says the team is “fully focused” on the job at hand tomorrow where they will be hoping for another strong crowd at Tolka Park, which he says he “thrives on.”

“I&rsquo;ve preferred it since the fans have come closer to the pitch, they&rsquo;ve become the 12th man, any support is helpful and if the head is down they will keep you going,” he says.

“At the very start, we said we wanted to win the league, and we&rsquo;ve got a busy period coming up now where we will be looking for three points, game by game, just keep chipping away and give 100% every week,” he says.

Grabbing important goals so far this season, Brennan says he has joked with team mate Ciaran Kilduff over the scoring charts, but remains impressed by the whole team&rsquo;s efforts to work well together and focus on the teams one goal: promotion. “We&rsquo;re doing well and long may it continue,” he says.