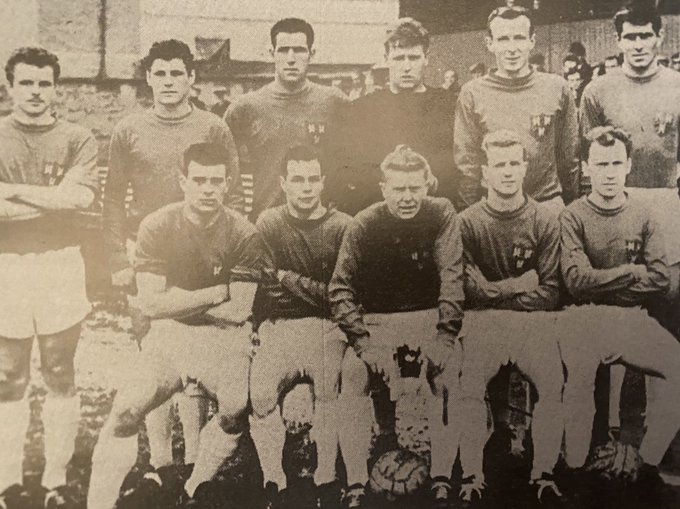 Tommy Carroll made his debut for Shelbourne aged just 15, alongside his elder brother Eddie. During his seven years with the Reds, he won the FAI Youth Cup, League Championship, FAI Cup as well as the Leinster Senior Cup and the Dublin City Cup. When Tony Dunne left Shels to join Manchester United immediately after the 1960 FAI Cup Final Tommy Carroll made the right full back position his own.

Up to the time he left Tolka Park, he was regarded by many as the best full back in the league. Representative honours followed with two amateur international caps against a Great Britain Olympic team in the 1959/60 season, with Ireland losing at home and away. Between 1960 and 1963, he made seven Inter-League appearances, with just two draws and no wins in the seven games.

In his final Inter-League appearance against the Scottish League in 1962/63 played in Glasgow, the League of Ireland were crushed and humiliated 11-0. In 1964 he decided to leave Shels and surprisingly try his luck in England with non-league side Cambridge City. He played in the first ever under 23 International game in 1966.

At the end of the 1965/66 season he moved to Ipswich Town in the old second division for a fee of £1,500 sterling. He played for Ipswich at right full back for six seasons and helped the Tractor Boys to promotion to the First Division in his first season.

On and off the field, he developed a very good relationship with a Scot by the name of Bill Baxter. Team captain, long serving Baxter was a tough rugged centre back who joined Ipswich in 1960 and was a fan’s favourite and hero worshipped at Portman Road. However, as so often happens at a football club, a change of manager can easily change the dynamics at the club. Bobby Robson was appointed manager of ITFC in 1969 and it was there he established his reputation as a top class manager.

However, very soon cracks began to appear in the relationship between the manager in his dealings with Tommy Carroll and Baxter. The unwillingness of the pair to adapt to the new training methods and Carroll’s ongoing requests for new improved terms to his contract was at the heart of the problem. Robson described the Irishman’s conduct with regard to his contract as a bit obstreperous.

Carroll considered the new contract offer not enough and his manner became moody and disobedient. Baxter for his part was not interested in new things on the training field and neither tried to adapt.

Both players were dropped from first team action. Later, it was claimed that the pair were caught laughing and wanted to drink a toast to Stoke’s FA Cup victory over Ipswich. Finally things came to a head when, on a Friday the day before a league game, Carroll and Baxter returned to the changing room after training. Carroll, noticing that he had not been selected for the next game,  ripped the team sheet off the notice board and thrust it in Robson’s face and told the manager where to stick his team.

All of a sudden violent blows were exchanged and the Ipswich Assistant Manager, Cyril Lea, jumped to the defence of Robson and Baxter immediately joined Carroll in the fray. We now had the Irishman, the Englishman, the Welshman (Lea is Welsh) and the Scotsman fighting. What happened next was described by the local hacks as something akin to a serious bar room brawl.

The upshot of it all was both Carroll and Baxter were suspended for a couple of weeks, transfer listed and told to keep away from the training ground. Months after being frozen out at Ipswich, Baxter was transferred to Hull City for £11,000 sterling and Carroll to Birmingham City for £20,000 sterling. Ipswich Town were in no mood to facilitate a quick transfer until they got their asking price.

Given that Carroll had cost just £1,500 and had given the club a good six years service, Ipswich made themselves a tidy profit of £18,500. In November 1971, Tommy signed for Birmingham City after an initial one month’s loan period. In an interview given to the Irish Independent at the time, Carroll claimed that the whole thing was blown out of proportion.

Nevertheless, Carroll was a very bitter and lonely man at the time. Bitter at the length of the suspension imposed by Robson, because he was not allowed to attend the ground for training. Robson for his part stated in a documentary about his life in football-Just Call Me Bobby- and in his Autobiography-Farewell but not Goodbye- expresses his deep regret about the whole situation. He said he acted as he did otherwise his authority would have been undermined. He also acknowledged that both Carroll and Baxter were very good players.

Carroll remained at Birmingham until 1973 and helped the Blues to promotion to the First Division in his first season just as he had done at Ipswich.

After the Ipswich affair, Carroll was pleased that the then Republic of Ireland Manager, Mick Meagan, remained loyal and continued to select him for the national team. He was capped 17 times from 1968-1973 scoring once from the penalty spot in a 1-1 draw with Sweden in a European Qualifier played at Dalymount Park.

Unfortunately for Tommy, Ireland only won two of the seventeen games he played in and they were friendly games. Alas, Irish fans may not remember much about his time in the green jersey because all but five games were played away from home.

He returned to Ireland to manage Shelbourne for part of the season 1975/76 following the departure of long serving Gerry Doyle. In December 1976 he was appointed player/manager of Athlone Town, succeeding Trevor Hockey.