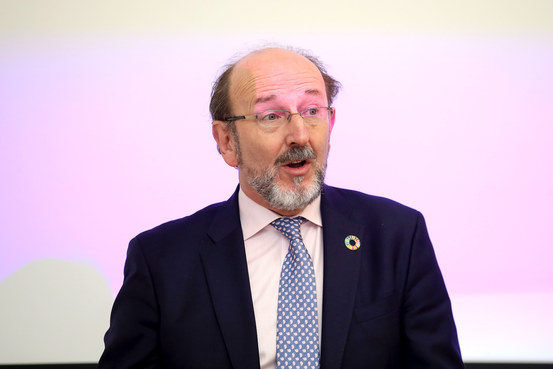 The Club is thrilled to welcome Brian, who comes into the role with a wealth of outstanding achievements in his illustrious career.

Prof MacCraith was President of Dublin City University (DCU) from 2010 to 2020.

During his time as President, DCU developed significantly in terms of scale, footprint, and reputation. DCU became Ireland’s fastest growing university, now having more than 18,000 students, and added three campuses in the North Dublin region since 2015.

Under his leadership, DCU developed a significant international profile, with major academic and research partnerships across the globe, and a strong reputation for innovation.

MacCraith has a strong interest in sport and, during his time as President, many sports, both individual and team-based, flourished at DCU. The university soccer team won the inter-varsity Collingwood Cup for the first time in 2020.

He has chaired a number of important reviews on behalf of the Irish Government. These included a Strategic Review of Medical Training and Career Structures (‘MacCraith Report’ published in June 2014) and the Review of STEM Education in the Irish School System (Report published in November 2016). He also chaired a Rapid Review of the Cervical Check Programme on behalf of the HSE in 2019.

He chairs the Board of the Gaelic Players Association (GPA) and is a Board member of both Barretstown Children’s Charity and Social Entrepreneurs Ireland (SEI).

Prof MacCraith is currently heading the government’s High-Level Task Force on COVID19 Vaccination, which is overseeing the roll-out of COVID-19 vaccines in Ireland.

Prof MacCraith’s appointment aligns with Shelbourne’s vision of innovation and quality as well as our social values.

Prof MacCraith is the third successive Honorary Life President of the club from County Louth, as his predecessors Theresa and Tony Donnelly also hailed from the county.

Shelbourne FC’s Andrew Doyle, who has recently become the club’s Chairman, said: “We are delighted that a man of Brian’s vision and calibre has agreed to become our Honorary Life President.

“We look forward to continuing the process of building Shelbourne to be the leading professional football club for both the men’s and women’s game on this island under Brian’s Presidency.”

Prof. MacCraith said: “I am very pleased to take on this honorary role at Shelbourne FC. The Club has an illustrious history, stretching back more than a century, but, more importantly, it promotes important values, including integrity, community engagement, equality and inclusion. I look forward to being part of the club’s exciting future.”