2014/15 saw James moved back to his local club, Darndale FC, scoring 45 goals in the season while helping his side to the double – the AUL Premier C League title and the Regency Hotel Cup.

James English had been part of the Republic of Ireland Amateur International squad prior to joining Shelbourne in June 2015.

Having joined Shelbourne in mid-season of 2015, James played in 11 league games and scoring five goals by season’s end.

The following season, English played in 25 of the season’s 28 league games, scoring 11 times. He also is all of the club’s cup games that season, three in the EA Sports Cup (scoring once), and once in each of the FAI and Leinster senior Cups.

English re-signed for Shelbourne for the 2017 season and having played in 25 league games, 4 Leinster Senior Cup, One League Cup and two FAI Cup games, re-signed for the 2018 season on October 30, ’17

James ‘Burbok’ English was voted ‘Player of the Year 2018’ by Shelbourne supporters. He re-signed for the 2019 season in early November 2018. 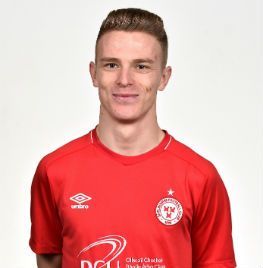