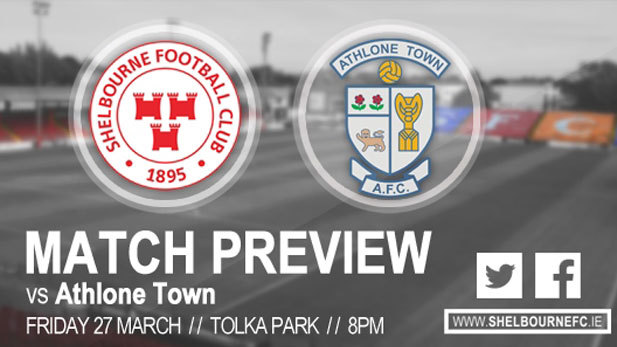 Top of the table duo Shelbourne and Athlone Town (separated only on goal difference) meet at Tolka Park on Friday night in the fourth series of games in Division One of the SSE Airtricity League. Kick-off at Tolka Park is 8.00pm.

Both sides have won their last two games, following a draw on the opening night of the season.

‘Town’ were in Waterford for the first game and dropped two points as a result of the Blues scoring in the 4th minute of added time, Coughlan having had the only goal until then, scored just before half-time. Their second game was more clear cut, a 4-0 win at home to Cobh Ramblers, while, at last week’s game at UCD, Athlone had a reverse of the scoring on day one, getting the winner in the 2nd minute of ‘lost’ time, their first (and equaliser) having been scored in the 82nd minute – College having had the only goal until then, scored (yes!) just before half time!!

Shelbourne drew (0-0) with Finn Harps on the opening game, ruing the number of missed scoring chances, particularly in the first half. Their away game at the Belfield Bowl ended 1-0 (Heaney) to the visitors and at league newcomers Cabinteely last week, a penalty scored by Philly Hughes was enough to take all three points, though if created chances had been put away by the forwards, both team and supporters would have been able to breathe easier much earlier.

In between league games, in the EA Sports Cup, Shelbourne had seen off Drogheda United (0-1), while Athlone came up against a Bohemians team in good scoring form, losing 3-0.

On last week’s game with Cabinteely, Shelbourne manager Kevin Doherty had this to say “It was a tough game for us, as we expected. We deserved to win, though we will have to start converting the chances we are creating”

On Friday’s game “Athlone are a team of quality players. I have watched them and have had them watched. It will be difficult but we feel that we have prepared well for the game and we’re now looking forward to Friday”.

Shelbourne will be without Simon Dixon and Paul Andrews once more – the former still some weeks away, while Andrews expects that he could be back in the next two weeks. Dylan McGlade limped out a a friendly against Newbridge Town on Tuesday night with a hamstring injury and will also miss out on Friday. Adam O’Connor did come through that game at Station Road and will be in contention for a starting position against Athlone.

There are no suspensions this week.