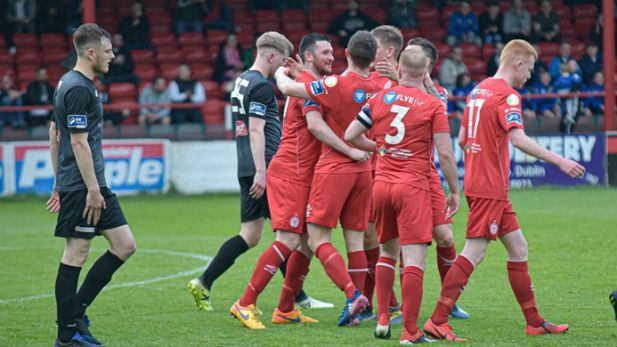 Shelbourne remain in pole position at the top of the SSE Airtricity League First Division following a 1-0 win over Limerick FC at the Markets Field.

Ciaran Kilduff’s strike on 38 minutes proved decisive but it could have been so different for the home side. Darren Murphy had a glorious chance to put Tommy Barrett’s men in front in the 21st minute when Kieran Hanlon was pushed by Luke Byrne in the penalty area. The former Cobh midfielder attempted to chip the ball into the net but got it horribly wrong as his effort sailed over the bar.

Lee Devitt had a chance immediately after the penalty but his effort was stopped by Colin McCabe. If the missed penalty wasn’t bad enough, things got worse for Limerick seven minutes before the break. Goalkeeper Jack Brady attempted to shield the ball over the end line for a goal kick but Kilduff managed to keep the ball in play and then supply a sublime finish from an acute angle.

Limerick were the better side in the first half but the Dublin side bossed the action after the break and cruised to victory without much trouble to maintain their advantage at the top.