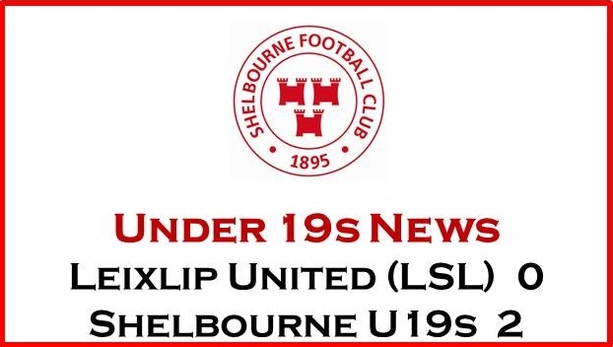 Shelbourne’s U19s were back in action last night, playing against Leinster Senior Side Leixlip United in the splendour of their Collinstown, Leixlip venue.

Martin Murray’s conveyor belt of talent was on view again last night, even though he has had five players promoted to the First Team, he has regrouped his squad and they are again playing football that is so pleasant on the eye with skipper Aaron ‘Red’ Robinson and Armstrong Bekombo taking over the mantle and dominating the midfield, with many support players around them.

From the very off Shelbourne went abouttheir work with both wide men Ronan O’Flynn and Davis Pakenham creating half chances for young George Mukete, who was unlucky not to score. The only surprise was we reached half time with the game scoreless.

Once again Shels stepped it up in the second half, withboth David Pakenham and George Mukete bringing the best out of the Leixlip keeper. Eventually, in the 57th minute, the breakthrough came for Shels,whensome great combination play between Andy Gorman and Ronan O’Flynn saw Gorman playing a cross to in-rushing Dylan Grimes, who flickedthe cross goal bound and in trying to clear Leixlip centre half put it into his own net.The score wasnothing more than was deserving.

Shels continued to dominate the game and eventually got the their second when, from a Leixlip corner cleared by Keeper Jack Brady to Aaron Ralphhe played the ball in to Stephen Confrey, who played a one two with George Mukete and broke clear to finish to the bottom of the net, with his left foot, to finish off a very satisfying win by Shelbourne.

On this performance it won’t be to long before Murray will lose some more of this squad to the first team. The poise and confidence that some of these young lads show is amazing, especially when you consider Dylan Grimes, Luke Doyle and George Mukete are only 16 years old.

Next up for Murray’s crew is a friendly against our friends Ayrfield on Sat 10th in Stella Maris’s ground (off Richmond Road) with 6pm ko.