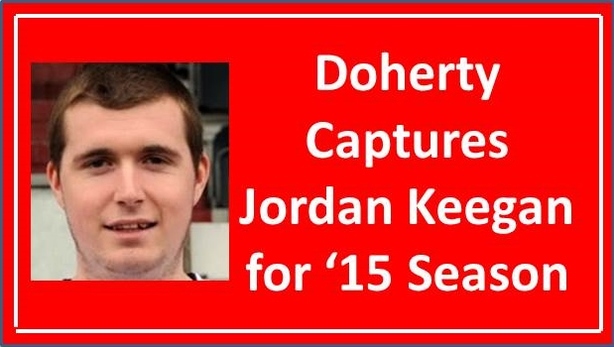 Despite Keen Interest from Premier Clubs

Manager Kevin Doherty has suceeded in obtaining the signature on Jordan Keegan for the new season. Jordan has been in talks with at least two Premier Division clubs, but has opted to stay with the Tolka Park club for at least another season.

Following his return from Southampton, Jordan Keegan joined Saint Patrick’s Athletic in 2011 and played his first game against Cliftonville in the Setanta Sports Cup in February. His time at St. Pat’s was short however and after playing in twelve games for the Inchicore club, he moved to Monaghan United in July that season.

He helped ‘the Mons’ to promotion, scoring four goals in twelve games, as well as both games in the Play-offs against Galway Utd.

Keegan featured in thirteen games for the Gortakeegan club, including one where he scored twice for United in the league game away to Dundalk – something that was to stand to him later in his career.

Monaghan withdrew from the Airtricity League in June 2012 and in the months that followed, Jordan played in a summer tour in Ireland for Scunthorpe United, obviously impressing – as he was signed by them in August. Things didn’t work out too well for him at his new club, playing in just a handful of games in August and September, and he returned to Ireland.

He signed for St. Patrick’s Athletic at the start of the 2013 season. Again, his time at Inchicore was not the happiest and he made just two substitute appearances, the final one being in late April and he was released by Pats in July.

With memories of his brace against them twelve months earlier, Dundalk were not slow to capture his signature, for the remaining months of the season. He made six appearances for the ‘Lilywhites’, helping them to get to second position in the league, behind St. Pats, but was released at the end of his contract.

In December ’13, Keegan signed for Cherry Orchard, but the draw of the Airtricity League was too great, resulting in him signing for the ‘Real Reds’last January, ahead of the start of the 2014 season.