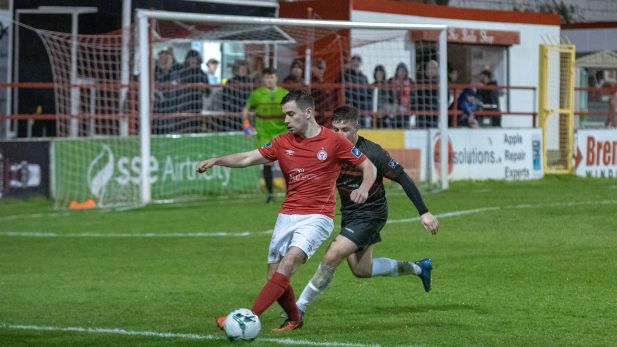 Shelbourne travel to United Park tonight to face Drogheda United hoping to build on last Friday&rsquo;s win at home to Bray Wanderers. The Reds have a history of bringing good crowds to United Park and player Karl Moore believes the connection and passion between the fans and the players is the reason you play the game.” Having come off the bench with an assist and a goal away to Galway United in the first game of the season, Moore has been an ever present in the team and is relishing the rest of season in a division he says is “crazy.”

After a run of several starts, he says that “you can’t take it for granted” and the attacking midfielder believes the “quality we have in depth in the squad” is driving him and the whole team on with younger players “eager to learn.”

“You&rsquo;ve got players who can play multiple positions while other people can play in their positions. It&rsquo;s healthy, yeah you can get frustrated if you don&rsquo;t play but that drives you on in training. Everyone knows the manager is not afraid to make changes so you have to be at it every week,” he says.

A late arrival last season, scoring a hat-trick in his first game against Longford Town, Moore has certainly enjoyed his time so far at Tolka Park, and under manager Ian Morris, he says he has been further pushed on at the club. “I really enjoy the training sessions, it&rsquo;s not the same stuff over and over again, it&rsquo;s always different, something new and keeps you focused and interested. There will always be a purpose looking towards the game,” he says.

Moore believes the competitiveness and recent addition of GPS monitors for players has been “beneficial to a team as a whole.” “You know if you&rsquo;re not putting it in, it will be known so it&rsquo;s really interesting and I&rsquo;m enjoying it,” he adds.

That competitiveness has also extended itself to the SSE Airtricity League First Division this year with just two points separating the first six teams. “The league is mad this year, everyone is taking points off each other including the bottom side. You have to be at it, fully concentrated and having respect for each opponent or you will be turned over. It&rsquo;s fairly relentless, previously if you made some mistakes you might not be punished but so far this year we were,” he says.

Ahead of tonight&rsquo;s game in Drogheda, Shelbourne will be heading to United Park on the back of a 1-0 win at home to Bray Wanderers. A game which saw Shels fans together in the Main Stand of Tolka Park, which Moore says was “great to see.”

“The crowd in the corner were really loud and it doesn’t go unnoticed. Same in Galway, especially with the manner of the win there. It&rsquo;s great for the players, great for the fans. We want to keep the atmosphere going and get the crowd going in every game,” the Dubliner says.

Positionally, Moore has been enjoying playing in a forward position where he “can effect the game” and feels with a more possession based game under the stewardship of Ian Morris, he feels “more involved” than ever. “Leaning towards possession suits me as a player rather than the more physical style and it helps me to prosper. It&rsquo;s very enjoyable to be involved and I feel as if things are starting to click now, we&rsquo;re eradicating mistakes, and it&rsquo;s more of what we&rsquo;re about,” he says.